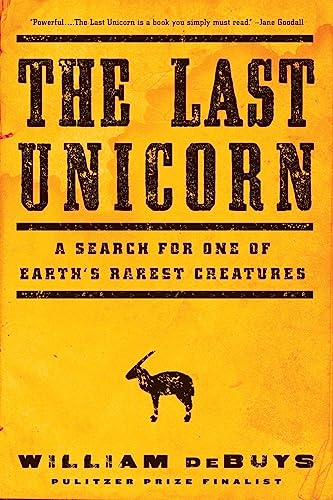 The Last Unicorn by William deBuys

An award-winning author's stirring quest to find and understand an elusive and exceptionally rare species in the heart of Southeast Asia's jungles.

The Last Unicorn: A Search for One of Earth's Rarest Creatures by William deBuys

In 1992, in a remote mountain range, a team of scientists discovered the remains of an unusual animal with beautiful long horns. It turned out to be a living species new to western science -- a saola, the first large land mammal discovered in 50 years.

Rare then and rarer now, no westerner had glimpsed a live saola before Pulitzer Prize finalist and nature writer William deBuys and conservation biologist William Robichaud set off to search for it in the wilds of central Laos. The team endured a punishing trek, up and down whitewater rivers and through mountainous terrain ribboned with the snare lines of armed poachers.

In the tradition of Bruce Chatwin, Colin Thubron, and Peter Matthiessen, THE LAST UNICORN is deBuys's look deep into one of the world's most remote places. As in the pursuit of the unicorn, the journey ultimately becomes a quest for the essence of wildness in nature, and an encounter with beauty.

William deBuys is the author of eight books, including River of Traps, a New York Times Notable Book of the Year and a Pulitzer Prize nonfiction finalist; Enchantment and Exploitation; The Walk (an excerpt of which won a Pushcart Prize in 2008); and A Great Aridness. An active conservationist, deBuys lives in New Mexico.
GOR011132945
9780316232876
0316232874
The Last Unicorn: A Search for One of Earth's Rarest Creatures by William deBuys
William deBuys
Used - Like New
Paperback
Little, Brown & Company
2015-10-29
368
N/A
Book picture is for illustrative purposes only, actual binding, cover or edition may vary.
The book has been read, but looks new. The book cover has no visible wear, and the dust jacket is included if applicable. No missing or damaged pages, no tears, possible very minimal creasing, no underlining or highlighting of text, and no writing in the margins
Trustpilot