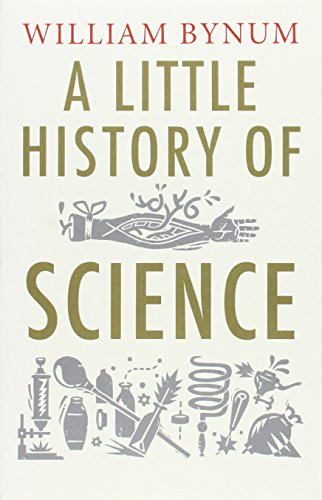 A Little History of Science
by William F. Bynum

Out of Stock
$21.49
inc. GST
A spirited volume on the great adventures of science throughout history, for curious readers of all ages
Very Good
Only 0 left

A Little History of Science Summary

A Little History of Science by William F. Bynum

A spirited volume on the great adventures of science throughout history, for curious readers of all ages

Science is fantastic. It tells us about the infinite reaches of space, the tiniest living organism, the human body, the history of Earth. People have always been doing science because they have always wanted to make sense of the world and harness its power. From ancient Greek philosophers through Einstein and Watson and Crick to the computer-assisted scientists of today, men and women have wondered, examined, experimented, calculated, and sometimes made discoveries so earthshaking that people understood the world-or themselves-in an entirely new way.

This inviting book tells a great adventure story: the history of science. It takes readers to the stars through the telescope, as the sun replaces the earth at the center of our universe. It delves beneath the surface of the planet, charts the evolution of chemistry's periodic table, introduces the physics that explain electricity, gravity, and the structure of atoms. It recounts the scientific quest that revealed the DNA molecule and opened unimagined new vistas for exploration.

Emphasizing surprising and personal stories of scientists both famous and unsung, A Little History of Science traces the march of science through the centuries. The book opens a window on the exciting and unpredictable nature of scientific activity and describes the uproar that may ensue when scientific findings challenge established ideas. With delightful illustrations and a warm, accessible style, this is a volume for young and old to treasure together.

A Little History of Science Reviews

"One advantage of a brief history is that this impressive roll of modern achievements unfolds while the leaps of prior centuries are still fresh in mind. That juxtaposition of what we know now verses what we knew then is breathtaking to contemplate. In Mr Bynum's telling, a little history goes a long way."-Alan Hirshfeld, Wall Street Journal
"This freshest entry in Yale's youngster-friendly Little History series covers science from Babylonian astronomy to the Human Genome Project and the Higgs Boson, in a series of lucid short chapters on telescopes, gases, engines, planetary orbits, cells, magnetism, pneumatic chemistry, continental drift and so forth. The author is particularly interesting on the history of medicine (his own field) . . . and he shows a gentle tolerant humour throughout."-Steven Poole, The Guardian

"Yale's youngster-friendly Little History series continues with science from Babylonian astronomy to the Higgs boson particle in a series of lucid short chapters on telescopes, gases, engines, plantetary orbits, cells, magnetism, pneumatic chemistry, continental drift, and so forth . . . [Bynum] takes a sly pleasure in pointing out that famous scientists have been deeply religious, and shows a gentle, tolerant humour throughout."-Steven Poole, The Guardian

"[An] entertaining history . . . for curious teen and adult readers."-Publishers Weekly

"Beginning with the Babylonians and ending with the World Wide Web, Bynum manages to squeeze in nearly every essential scientific idea and discovery while also discussing most major disciplines. . . . I happily confess I learned a lot."-Andrew Robinson, New Scientist

"This is a thoughtful, elegantly presented volume with the younger reader in mind, although it's an inspiring reminder to anyone of our extraordinary journey from ignorance to knowledge. . . . Each chapter is headed with a beautifully simple, monochrome block-print style illustration that encapsulates its themes."-Dallas Campbell, BBC Focus


"This interesting book traces the history of science in easy-to-consume bites, from the earliest recorded anatomical, mathematical and medical theories through to the most up-to-date references to the Higgs boson and the latest hypothesis on string theory. They're all made readable for the inquisitive non-scientists among us." Good Reading.

"A Little History of Science is an entertaining read that will provide a good grounding in the subject for older children."-John Harding, Daily Mail

"The book is delightfully illustrated and is written in an engaging style. . . . It would make a great present for those turned off by double physics, or an entertaining read for the boffin."-The Good Book Guide

"Bynum's history of science is simple, lucid and accessible. There isn't a single difficult sentence. Reading it could foster an enthusiasm for scientific endeavour in a young reader. . . . There is an underlying theme in this gentle treatise: the need for scientists to persevere, to co-operate, to believe in the common good and to see further, in Isaac Newton's words, by 'standing on the shoulders of giants.'"-Tom Moriarty, Irish Times

"I wish there had been such a book when I was a child. Bill Bynum's Little History of Science may be short but it tells a grand story: all of science lightly placed in ever-changing historical and philosophical contexts, but presented in a single arc from Empedocles to Tim Berners-Lee, Galen to Thomas Hunt Morgan, alchemy to insulin, the steam engine to the particle accelerator. It is a book I will be recommending for many years to come."-Christopher Potter, author of You Are Here: A Portable History of the Universe
"Well done Bill Bynum, a master of the scientific ordinance from the Big Bang to the Digital Age."-David Bellamy
"Science is not a dry recitation of data; it's thousands of years of questions that people have posed about the universe. In A Little History of Science, William Bynum ably distills this human saga into a delightfully clear tale. It may be little, but it manages to find room for galaxies, computers, chemistry, evolution and much more."-Carl Zimmer, author of A Planet of Viruses
"Small, but perfectly formed. In this little history, Bill Bynum has done a splendid job of weaving all the material into a narrative that is easy to understand. You will not find a better summary of the history of science."-Bernard Wood, author of Human Evolution: A Very Short Introduction

William Bynum is professor emeritus, history of medicine, University College London. He is author or editor of numerous publications, including most recently Great Discoveries in Medicine. He lives in Suffolk, UK.

GOR005909842
A Little History of Science by William F. Bynum
William F. Bynum
Little Histories
Used - Very Good
Paperback
Yale University Press
2013-08-02
272
0300197136
9780300197136
N/A
Book picture is for illustrative purposes only, actual binding, cover or edition may vary.
This is a used book - there is no escaping the fact it has been read by someone else and it will show signs of wear and previous use. Overall we expect it to be in very good condition, but if you are not entirely satisfied please get in touch with us.