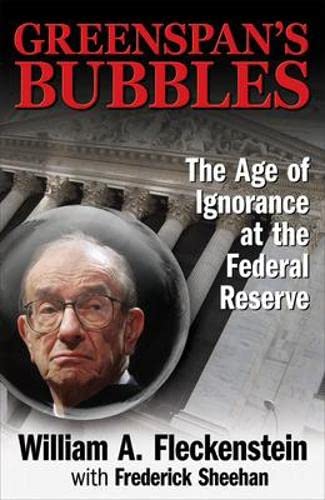 GREENSPAN'S BUBBLES: THE AGE OF IGNORANCE AT THE FEDERAL RESERVE
by William Fleckenstein

Used Price
$51.99
inc. GST
Free Shipping in Australia
By slashing interest rates to bail out investors, Fed Chairman Alan Greenspan made a lot of people rich but his actions resulted in the dot-com disaster of 2000 and the mortgage mess of 2007. This title reveals the truth behind Greenspan's recklessness. It offers an economic wake-up call for citizens and investors.
Reviews:
Trustpilot
Very Good

GREENSPAN'S BUBBLES: THE AGE OF IGNORANCE AT THE FEDERAL RESERVE Summary

GREENSPAN'S BUBBLES: THE AGE OF IGNORANCE AT THE FEDERAL RESERVE by William Fleckenstein

The stock market crash of 1987, the Savings & Loan crisis, the Asian crisis, the collapse of Long Term Capital Management, the stock market bubble of 2000, the feared Y2K crisis, and now the housing crisis - Alan Greenspan has a long history of slashing interest rates to bail out investors who should not need rescuing. In times past, Greenspan's avuncular style carried him through...as did his sage pronouncements of conundrums and the wall of worry.

But people in the know including Bill Fleckenstein were not convinced, and in Greenspan's Bubbles our author reveals why the economic decline and market chaos he and others predicted in 2003 has come to pass. More importantly, Fleckenstein makes a compelling case of Greenspan's culpability as a serial bubble blower and the individual responsible for our fragile financial state.

Fleckenstein explains just how far-reaching Greenspan's mess has been flung, and presents damning evidence that contradicts the former Fed chairman's public naivete concerning shifts in the market and the economy. In newly released transcripts of private meetings, it is clear that Greenspan had a much better understanding of the effects his decisions would have. Highlights of these meetings will be featured throughout the book, as will a timeline of disastrous decisions that were ultimately left for someone else to clean up.

Whether banker, broker, CEO, homeowner, hedge fund manager, 401-K holder or politician, people have been conditioned to believe that the Fed would ride to their rescue before any serious calamity could befall them. Their views towards risk have been altered as have expectations about future investment gains. The country has taken on more leverage and assumed more risk because 20 years of Alan Greenspan has taught them that the Fed will always bail them out and that asset (stocks and real estate) prices will always go higher. The author believes that the fall out of the Greenspan Put is a country in for a rude awakening. The problem is too big to bail out, and has affected markets at home and around the world, leaving billion dollar hedge funds by the world's most prominent brokerages in its wake.

Greenspan's Bubbles is a no-holds barred, lock-stock-and-barrel portrayal of how Greenspan's words and actions have led a generation to behave in ways that would never stand the test of time, seriously damaging the financial and economic stability of investors and citizens alike. In this story, the big bear catches up with Goldilocks.

Customer Reviews - GREENSPAN'S BUBBLES: THE AGE OF IGNORANCE AT THE FEDERAL RESERVE

William A. Fleckenstein is president of Fleckenstein Capital, a money management firm based in Seattle. He writes a daily Market Rap column for his Web site, Fleckensteincapital.com, as well as the popular column Contrarian Chronicles for MSN Money. Frederick Sheehan is a former Director of Asset Allocation Services at John Hancock Financial Services. He has written for Marc Faber's Gloom, Boom & Doom Report, Whiskey & Gunpowder, and the Prudent Bear Web sites.

GOR001667106
GREENSPAN'S BUBBLES: THE AGE OF IGNORANCE AT THE FEDERAL RESERVE by William Fleckenstein
William Fleckenstein
Used - Very Good
Hardback
McGraw-Hill Education - Europe
2008-02-01
208
0071591583
9780071591584
N/A
Book picture is for illustrative purposes only, actual binding, cover or edition may vary.
This is a used book - there is no escaping the fact it has been read by someone else and it will show signs of wear and previous use. Overall we expect it to be in very good condition, but if you are not entirely satisfied please get in touch with us.