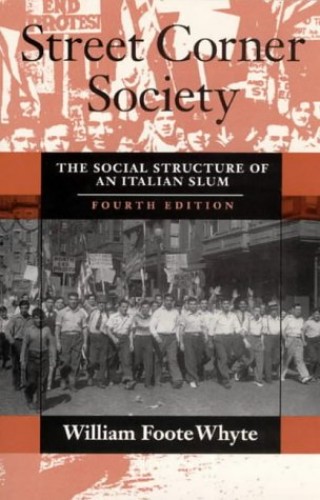 Out of Stock
$27.99
inc. GST
First published in 1943, this is an account of an Italian-American slum in Boston.
Very Good
Only 0 left

Street Corner Society is one of a handful of works that can justifiably be called classics of sociological research. William Foote Whyte's account of the Italian American slum he called Cornerville--Boston's North End--has been the model for urban ethnography for fifty years.

By mapping the intricate social worlds of street gangs and corner boys, Whyte was among the first to demonstrate that a poor community need not be socially disorganized. His writing set a standard for vivid portrayals of real people in real situations. And his frank discussion of his methodology--participant observation--has served as an essential casebook in field research for generations of students and scholars.

This fiftieth anniversary edition includes a new preface and revisions to the methodological appendix. In a new section on the book's legacy, Whyte responds to recent challenges to the validity, interpretation, and uses of his data. The Whyte Impact on the Underdog, the moving statement by a gang leader who became the author's first research assistant, is preserved.

GOR002173286
Street Corner Society: Social Structure of an Italian Slum by William Foote Whyte
William Foote Whyte
Used - Very Good
Paperback
The University of Chicago Press
1993-04-01
418
0226895459
9780226895451
N/A
Book picture is for illustrative purposes only, actual binding, cover or edition may vary.
This is a used book - there is no escaping the fact it has been read by someone else and it will show signs of wear and previous use. Overall we expect it to be in very good condition, but if you are not entirely satisfied please get in touch with us.