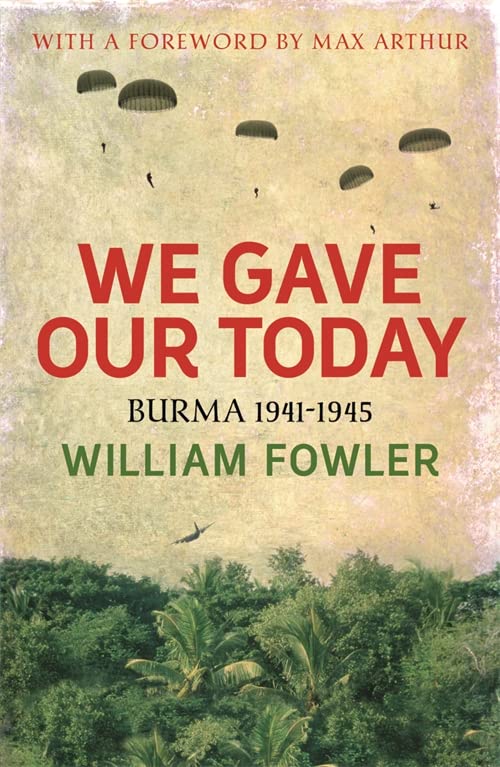 We Gave Our Today
by William Fowler

We Gave Our Today Summary

Nearly a million strong by 1944, the British 14th Army fought and ultimately conquered the Japanese forces that invaded Burma and strove to break through into India. But the victory was hard won, with great suffering along the way. With priority given to defeating Germany, these troops were last in line for additional men and equipment, and they joked about being "The Forgotten Army." Here is the story of these remarkable soldiers, whose monument at Kohima reads: 'When You Go Home, Tell Them Of Us And Say, For Their Tomorrow, We Gave Our Today.'

Customer Reviews - We Gave Our Today

We Gave Our Today Reviews

A humane and moving story, describing the pain and suffering, strength and immense courage of those involved. * HUDDERSFIELD DAILY EXAMINER *
This is the fascinating story of a forgotten army. * BIG ISSUE IN THE NORTH *
A very impressive read and a fitting tribute to the men who fought and died in one of the most unforgiving of military theatres. * SOUTH WALES ARGUS *

Educated at Clifton College and Trinity Hall, Cambridge, William Fowler was land forces editor of DEFENCE magazine and a contributing editor to JANE'S INFORMATION GROUP. A long term territorial soldier, he served with British forces in the Gulf War and graduated from the French Army Reserve Staff Officers course at the Ecole Militaire in Paris. He conducts regular battlefield tours and broadcasts on radio and television. He is married and lives in Hampshire.

GOR004336068
We Gave Our Today: Burma 1941-1945 by William Fowler
William Fowler
Used - Very Good
Paperback
Orion Publishing Co
2010-11-25
288
075382714X
9780753827147
N/A
Book picture is for illustrative purposes only, actual binding, cover or edition may vary.
This is a used book - there is no escaping the fact it has been read by someone else and it will show signs of wear and previous use. Overall we expect it to be in very good condition, but if you are not entirely satisfied please get in touch with us.