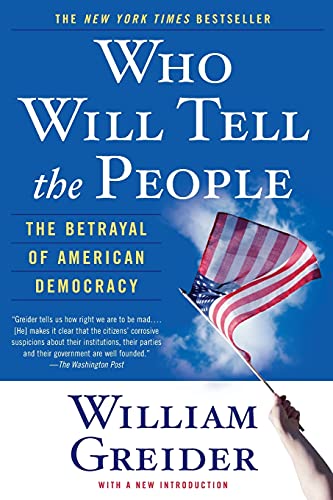 Who Will Tell the People
by William Greider

In Stock
$14.49
+10% GST
Describes the reality of the Washington decision-making process.
Well Read
Only 1 left

Who Will Tell the People Summary

Who Will Tell the People: The Betrayal of American Democracy by William Greider

"Who Will Tell the People" is a passionate, eye-opening challenge to American democracy. Here is a tough-minded exploration of why we're in trouble, starting with the basic issues of who gets heard, who gets ignored, and why. Greider shows us the realities of power in Washington today, uncovering the hidden relationships that link politicians with corporations and the rich, and that subvert the needs of ordinary citizens.

Who Will Tell the People Reviews

New York Daily News One of those rare, essential books that should be not merely read but memorized.
The Washington Monthly Valuable...Inspiring...[Greider's] criticism is not only broad but deep.
New York Newsday Greider knows Washington exceptionally well and is a fine guide to the pork-barreling and back-scratching that glue together the private welfare state.
The Washington Post Greider has mastered the knack of being sweeping and meticulous at the same time....Greider makes it clear that the citizens' corrosive suspicions about their institutions, their parties and their government are well founded.
Christian Science Monitor Raises questions that every American who retains a faith in the self-correcting capacities of democracy ought to confront. Greider's assessment is a compelling one.
The Nation William Greider has given us the most subtle interpretation of contemporary American political culture yet to appear in print.
Houston Chronicle The real question for Greider and for us is what we can do to reclaim democracy, to take it back from the wealthy special-interest groups that control the national agenda....Who Will Tell the People is a call to action. He makes a good argument that we'd better get busy if we are to make government work for us.
Playboy [An] eye-opening expose of how government has become a game for lobbyists, lawyers and influence brokers....Stirring.
San Francisco Chronicle Impassioned account of what has gone wrong with our democracy...[Greider] brings to his examination of the American political system an outsider's outrage and an insider's knowledge.
Time Who Will Tell the People sets out to explain precisely how and why American democracy has washed up on the shoals of cynicism. The complaint may sound familiar, but such a brief pr cis does not do justice to either the freshness of Greider's argument or the ambition of his approach.

William Greider is the bestselling author of five previous books, including One World, Ready or Not (on the global economy), Who Will Tell the People (on American politics), and Secrets of the Temple (on the Federal Reserve). A reporter for forty years, he has written for The Washington Post and Rolling Stone and has been an on-air correspondent for six Frontline documentaries on PBS. Currently the national affairs correspondent for The Nation, he lives in Washington, D.C.

GOR003224813
Who Will Tell the People: The Betrayal of American Democracy by William Greider
William Greider
Used - Well Read
Paperback
Simon & Schuster
1993-05-01
464
0671867407
9780671867409
N/A
Book picture is for illustrative purposes only, actual binding, cover or edition may vary.
This is a used book - there is no escaping the fact it has been read by someone else and it will show signs of wear and previous use. Overall we expect it to be in very good condition, but if you are not entirely satisfied please get in touch with us.