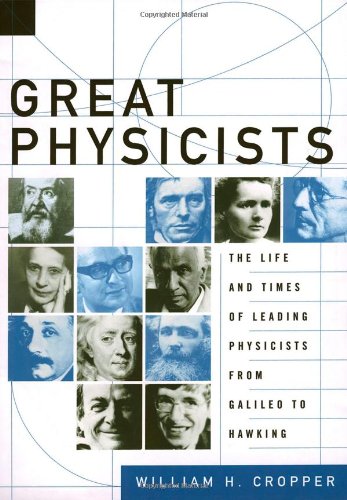 Out of Stock
$49.99
inc. GST
A lively history of modern physics, as seen through the lives of 30 men and women from the pantheon of the field. William H. Cropper portrays the life and accomplishments of such giants as Galileo and Isaac Newton, Marie Curie and Ernest Rutherford.
Very Good
Only 0 left

Great Physicists: The Life and Times of Leading Physicists from Galileo to Hawking by William H. Cropper

Here is a lively history of modern physics, as seen through the lives of thirty men and women from the pantheon of physics. William H. Cropper vividly portrays the life and accomplishments of such giants as Galileo and Isaac Newton, Marie Curie and Ernest Rutherford, Albert Einstein and Niels Bohr, right up to contemporary figures such as Richard Feynman, Murray Gell-Mann, and Stephen Hawking. We meet scientists--all geniuses--who could be gregarious, aloof, unpretentious, friendly, dogged, imperious, generous to colleagues or contentious rivals. As Cropper captures their personalities, he also offers vivid portraits of their great moments of discovery, their bitter feuds, their relations with family and friends, their religious beliefs and education. In addition, since scientists in a particular field often inspire those who follow, Cropper has grouped these biographies by discipline--mechanics, thermodynamics, particle physics, and so on--each section beginning with a historical overview. Thus in the section on quantum mechanics, readers can see how the work of Max Planck influenced Niels Bohr, and how Bohr in turn influenced Werner Heisenberg. By sequencing the biographies in this way, Cropper gives us an overall portrait of each field. Our understanding of the physical world has increased dramatically in the last four centuries, starting with Galileo and his telescope and stretching to Stephen Hawking's work on black holes and cosmology. With Great Physicists, readers can retrace the footsteps of the men and women who led the way.

... fun to read ... I have learned a lot about the influence of great physicists on each other and on the flow of physics ... Read it! Contemporary Physics ... of interest to sixth-formers ... and to all students and professionals wishing for a rounder picture of science. Great physicists, great book, great buy-an ideal Christmas present. Neil Hancox, Material World Including International Mining and Minerals ... a book that has such excellent biographical information, mixed in with fully accurate science, that it can serve both as a good guide for top secondary-school students, and as a wise collation of advice and experience for working physicists at all levels beyond. Nature

GOR005329230
Great Physicists: The Life and Times of Leading Physicists from Galileo to Hawking by William H. Cropper
William H. Cropper
Used - Very Good
Hardback
Oxford University Press Inc
2001-12-31
510
0195137485
9780195137484
N/A
Book picture is for illustrative purposes only, actual binding, cover or edition may vary.
This is a used book - there is no escaping the fact it has been read by someone else and it will show signs of wear and previous use. Overall we expect it to be in very good condition, but if you are not entirely satisfied please get in touch with us.