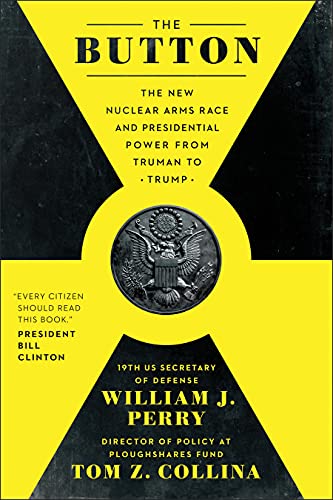 The Button by William J. Perry

The Button: The New Nuclear Arms Race and Presidential Power from Truman to Trump by William J. Perry

The President has the power to end the world in minutes. Right now, no one can stop him.

Since the Truman administration, America has been one "push of a button" away from nuclear war-a decision that rests solely in the hands of the President. Without waiting for approval from Congress or even the Secretary of Defense, the President can unleash America's entire nuclear arsenal.

Almost every governmental process is subject to institutional checks and balances. Why is potential nuclear annihilation the exception to the rule? For decades, glitches and slip-ups have threatened to trigger nuclear winter: misinformation, false alarms, hacked warning systems, or even an unstable President. And a new nuclear arms race has begun, threatening us all. At the height of the Cold War, Russia and the United States each built up arsenals exceeding 30,000 nuclear weapons, armed and ready to destroy each other-despite the fact that just a few hundred are necessary to end life on earth.

From authors William J. Perry, Secretary of Defense in the Clinton administration and Undersecretary of Defense for Research and Engineering in the Carter administration, and Tom Z. Collina, the Director of Policy at Ploughshares Fund, a global security foundation in Washington, DC, The Button recounts the terrifying history of nuclear launch authority, from the faulty 46-cent microchip that nearly caused World War III to President Trump's tweet about his "much bigger & more powerful" button. Perry and Collina share their firsthand experience on the front lines of the nation's nuclear history and provide illuminating interviews with former President Bill Clinton, former Secretary of Defense Jim Mattis, Congressman Adam Smith, Nobel Peace Prize winner Beatrice Fihn, senior Obama administration officials, and many others.

Written in an accessible and authoritative voice, The Button reveals the shocking tales and sobering facts of nuclear executive authority throughout the atomic age, delivering a powerful condemnation against ever leaving explosive power this devastating under any one person's thumb.

William J. Perry served as Undersecretary of Defense for Research and Engineering in the Carter administration, and then as Secretary of Defense in the Clinton administration, and has advised presidents all through the Obama administration. He oversaw the development of major nuclear weapons systems, such as the MX missile, the Trident submarine and the Stealth Bomber. His new "offset strategy" ushered in the age of stealth, smart weapons, GPS, and technologies that changed the face of modern warfare. His vision now, as founder of the William J. Perry Project, is a world free from nuclear weapons.

Tom Z. Collina is the Director of Policy at Ploughshares Fund, a global security foundation in Washington, DC. He has 30 years of nuclear weapons policy experience and has testified before the Senate Foreign Relations Committee and was closely involved with successful efforts to end U.S. nuclear testing in 1992, extend the Nuclear Non-Proliferation Treaty in 1995, ratify the New START Treaty in 2010, and enact the Iran nuclear deal in 2015. Collina has published hundreds of articles, op-eds, and reports and appears frequently in major media.

Preface: "Your Shot, Mr. President"
Part I: The Wrong Threat
1. The President's Weapons
2. Bolt from the Blue
3. Blundering into Nuclear War
4. Hacking the Bomb
Part II: A New Nuclear Policy
5. No First Use
6. How Not to Spend $2 Trillion
7. Welcome to the New Arms Race
8. The Missile Defense Delusion
Part III: Beyond the Bomb
9. Why Do We Still Have the Bomb?
10. The Atomic Titanic
Notes
Acknowledgments
Index

NGR9781948836999
9781948836999
1948836998
The Button: The New Nuclear Arms Race and Presidential Power from Truman to Trump by William J. Perry
William J. Perry
New
Hardback
BenBella Books
2020-07-16
335
N/A
Book picture is for illustrative purposes only, actual binding, cover or edition may vary.
This is a new book - be the first to read this copy. With untouched pages and a perfect binding, your brand new copy is ready to be opened for the first time
Trustpilot