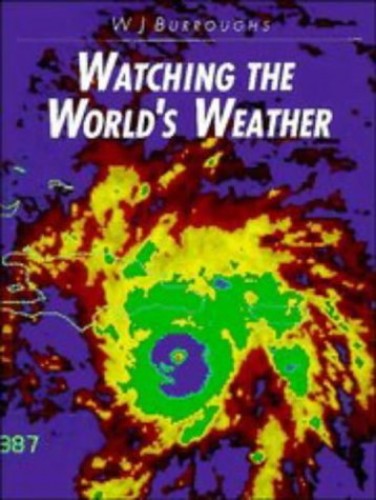 In Stock
$23.99
inc. GST
The complexities of the global weather machine on every scale can be revealed through spectacular images of satellite photography. This book sets these developments in the context of the essential physics of the weather and reviews the historical development of satellite meteorology.
Very Good
Only 2 left

What are hurricanes fuelled by? How are rainfall levels predicted? Can weather forecasts be more accurate? How can we get direct evidence of the dynamics of our atmosphere? Weather satellites have totally altered our perspective of the weather. They have transformed the science of meteorology, weather forecasting and the study of the global climate. This book sets these developments in the context of the essential physics of the weather and reviews the historical development of satellite meteorology. The complexities of the global weather machine on every scale are revealed through spectacular images of satellite photography. At a time of growing concern about the impact of pollution on the global climate, weather satellites will play an increasingly crucial role in monitoring how changes such as the ozone hole and global warming will affect the world's climate. Anyone who is interested in how the weather works now and in the future should buy this book.

'... we meteorologists particularly must applaud the finished product as a significant contribution to popularising a central part of our science.' Physics World
'... optimistic, attractive and well-illustrated' New Scientist
'Watching the World's Weather is certainly informative, and honest about the limitations of satellite data as well as the undoubted benefits. The occasionally rather dry prose is leavened by the inclusion of some spectacular satellite pictures of storms and hurricanes. The satellite image on the television screen will never seem quite the same again.' Nature
"...certainly informative, and honest about the limitations of satellite data as well as the undoubted benefits." Nature
"An excellent and well-illustrated book for the student or general reader interested in weather and climate or in the achievements of the space program. It does not require of its readers a technical background, although a foreknowledge of the rudiments of weather would be helpful. Thus, it is unique and valuable work in that its treatment of fronts, highs and lows, and other familiar weather phenomena is truncated a bit in favor of the perspective gained from satellite observations of many kinds." A.R. Upgren, Choice
"...highly recommend it to those who are interested in learning the basics about satellite meteorology, those who are currently teaching or are interested in teaching an introductory course in satellite meteorology, or those who have to teach a satellite meteorology course to a population that does not have an extensive background in physics and mathematics. I also recommend the book to those interested in climate change or those who may need an additional text dealing with climate change as derived by satellite." Steven Lyons, Bulletin of the American Meteorological Society
"...truly an excellent book which serves extremely well the purpose of explaining the goals and achievements of satellite meteorology." Hanna Pawlowska, PAGEOPH
"The author is well known for his articles on aspects of the weather in New Scientist. This book is written in a similar style and is easy to follow....If...you need an introduction to the complexities of the atmosphere and the role of satellites in environmental sciences, without any detailed knowledge of physics and chemistry, then this is the book for you." I. Colbeck, Chemistry in Britain
"...for anyone who has seen a TV weathercast and wondered how satellite pictures are obtained and translated into weather forecasts. It is an introduction to atmospheric science approached through a discussion of satellite observations....highly stimulating, providing real help toward understanding the achievements and problems associated with forecasting the weather and assessing the state of the climate of the planet." Peter J. Robinson, American Scientist

GOR005246890
Watching the World's Weather by William James Burroughs
William James Burroughs
Used - Very Good
Hardback
Cambridge University Press
1991-03-21
208
0521343429
9780521343428
N/A
Book picture is for illustrative purposes only, actual binding, cover or edition may vary.
This is a used book - there is no escaping the fact it has been read by someone else and it will show signs of wear and previous use. Overall we expect it to be in very good condition, but if you are not entirely satisfied please get in touch with us.