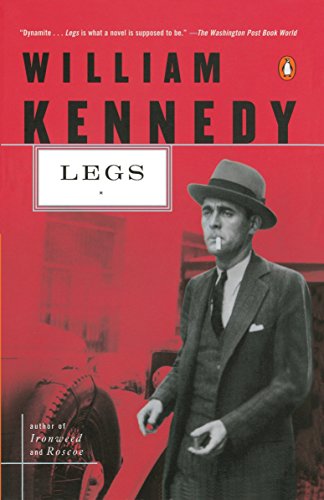 Legs, the inaugural book in William Kennedy's acclaimed Albany cycle of novels, brilliantly evokes the flamboyant career of gangster Jack "Legs" Diamond. Through the equivocal eyes of Diamond's attorney, Marcus Gorman (who scraps a promising political career for the more elemental excitement of the criminal underworld), we watch as Legs and his showgirl mistress, Kiki Roberts, blaze their gaudy trail across the tabloid pages of the 1920s and 1930s.

"Dynamite . . . Legs is what a novel is supposed to be."
- The Washington Post Book World

"The best novel about a criminal legend I've ever read."
- Hunter S. Thompson

"A brilliant novel, a truly creative piece of work . . . like any real artist, Kennedy takes what is really a sordid, vulgar reality and turns it into a human tragedy."
- Mario Puzo

William Kennedy, author, screenwriter and playwright, was born and raised in Albany, New York. Kennedy brought his native city to literary life in many of his works. The Albany cycle, includes Legs, Billy Phelan's Greatest Game, and the Pulitzer Prize winning Ironweed.The versatile Kennedy wrote the screenplay for Ironweed, the play Grand View, and cowrote the screenplay for the The Cotton Club with Francis Ford Coppola. Kennedy also wrote the nonfiction O Albany! and Riding the Yellow Trolley Car. Some of the other works he is known for include Roscoe and Very Old Bones.

Kennedy is a professor in the English department at the State University of New York at Albany. He is the founding director of the New York State Writers Institute and, in 1993, was elected to the American Academy of Arts and Letters. He has received numerous literary awards, including the Literary Lions Award from the New York Public Library, a National Endowment for the Arts Fellowship, and a Governor's Arts Award. Kennedy was also named Commander of the Order of Arts and Letters in France and a member of the board of directors of the New York State Council for the Humanities.

GOR004486363
Legs by William Kennedy
William Kennedy
Used - Well Read
Paperback
Penguin Books Ltd
1983-01-27
320
0140064842
9780140064841
N/A
Book picture is for illustrative purposes only, actual binding, cover or edition may vary.
This is a used book. We do our best to provide good quality books for you to read, but there is no escaping the fact that it has been owned and read by someone else previously. Therefore it will show signs of wear and may be an ex library book.