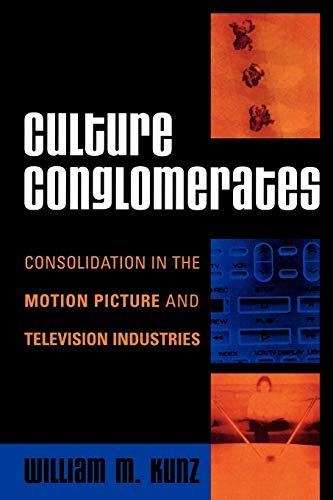 Out of Stock
$43.99
inc. GST
Explains conglomeration and regulation in the film and television industries, covering its history as well as the contemporary scene. Useful as a supplement for a variety of media courses, this text includes synopses of key media regulations and policies, discussion questions, a glossary, and entertaining boxed features.
Good
Only 0 left

This succinct overview explains conglomeration and regulation in the film and television industries, covering its history as well as the contemporary scene. Former producer William M. Kunz shows how the structure of these industries has evolved and how this structure impacts the production and distribution of cultural products. Ideal as a supplement for a variety of media courses, this student-friendly text includes synopses of key media regulations and policies, discussion questions, a glossary, and interesting sidebars.

Culture Conglomerates: Consolidation in the Motion Picture and Television Industries...offers a new analysis of the growing consolidation in the visual media-film and television. * Communication Booknotes Quarterly, December 2008 *
Kunz's book is a marvelous addition to the large body of literature on the media industries from a political economy perspective. He asks some fundamental questions about the high degree of concentration in film and television industries and its relationship to the failure of corporate media to create an informed citizenry. Equally important, Kunz demonstrates how the U.S. government and the dominant corporations have worked hand in hand since Ronald Reagan's presidency to create this situation in the United States. The book is well researched, well argued, and lucidly written. This is not 'abstract' empiricism but solid political-economic research that will be useful for researching and teaching for years to come. -- Manjunath Pendakur, Southern Illinois University

William M. Kunz is assistant professor in the Department of Interdisciplinary Arts and Sciences at the University of Washington at Tacoma. He has also worked as a vice president and senior producer at Turner Broadcasting and as a producer with ABC Sports and NBC Sports.

GOR009736981
Culture Conglomerates: Consolidation in the Motion Picture and Television Industries by William M. Kunz
William M. Kunz
Critical Media Studies: Institutions, Politics, and Culture
Used - Good
Paperback
Rowman & Littlefield
2006-06-29
272
0742540669
9780742540668
N/A
Book picture is for illustrative purposes only, actual binding, cover or edition may vary.
This is a used book - there is no escaping the fact it has been read by someone else and it will show signs of wear and previous use. Overall we expect it to be in very good condition, but if you are not entirely satisfied please get in touch with us.