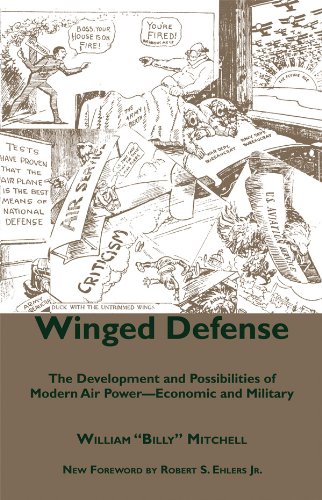 In Stock
$41.99
+10% GST
This book is the basis for airpower doctrine in the US. It is essential reading for anyone concerned with airpower history or aerospace doctrine. William Lendrum ""Billy"" Mitchell (December 28, 1879 - February 19, 1936) was regarded as the father of the US Air Force, and is one of the most famous and most controversial figures in the history of American airpower.
Very Good
Only 1 left

Winged Defense: The Development and Possibilities of Modern Air Power--Economic and Military by William Mitchell

This book is the basis for airpower doctrine in the US, and demonstrates how forward looking Gen Mitchell was even though the technology for conducting air operations was in its infancy when it was written. It is essential reading for anyone concerned with airpower history or aerospace doctrine. William Lendrum 'Billy' Mitchell (December 28, 1879 - February 19, 1936) was an American Army general who is regarded as the father of the U.S. Air Force, and is one of the most famous and most controversial figures in the history of American airpower. Mitchell served in France during the First World War and, by the conflict's end, commanded all American air combat units in that country. After the war, he was appointed deputy director of the Air Service and began to advocate increased investment in air power, claiming this would prove vital in future wars. He particularly stressed the ability of bombers to sink battleships and organized a series of dramatic bombing runs against stationary ships designed to test the idea that attracted wide notice from the public. He antagonized many in both the Army and Navy with his arguments and criticism and, in 1925, was demoted to Colonel. Later that year, he was court-martialed for insubordination after accusing military chiefs of an 'almost treasonable administration of the national defense.' He resigned from the service shortly thereafter. Mitchell received many honors following his death, including a commission by the President as a Major General. He is also the only individual after whom a type of American military aircraft is named: the B-25 'Mitchell.'

Arguably no American was more instrumental in promoting the development and use of airpower than Billy Mitchell. Winged Defense remains a premier aviation classic and a must-read for all service and commercial aviators. Logisticians, military historians, entrepreneurs, economists, leaders of all types, and those interested in the power of ideas will find this book valuable.

Robert S. Ehlers Jr. is a colonel in the United States Air Force. He is currently serving as a professor of airpower history at the School of Advanced Air and Space Studies, Maxwell AFB, Alabama. Colonel Ehlers has also served in command positions at the squadron and group levels.

GOR010091349
Winged Defense: The Development and Possibilities of Modern Air Power--Economic and Military by William Mitchell
William Mitchell
Used - Very Good
Paperback
The University of Alabama Press
2010-03-15
302
0817356053
9780817356057
N/A
Book picture is for illustrative purposes only, actual binding, cover or edition may vary.
This is a used book - there is no escaping the fact it has been read by someone else and it will show signs of wear and previous use. Overall we expect it to be in very good condition, but if you are not entirely satisfied please get in touch with us.