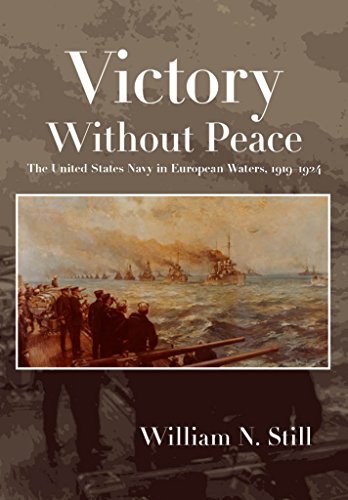 Victory Without Peace concentrates on the U.S. Navy in European and NearEastern waters during the post-World War I era. As participants in theVersailles peace negotiations, the Navy was charged with executing the navalterms of the Armistice as well as preserving stability and peace. U.S. warshipswere deploying into the Near East, Baltic, Adriatic, and Northern Europe, whilesimultaneously withdrawing its demobilized forces from European waters. Thissignifies the first time the U.S. Navy contributed to peacetime efforts, setting aprecedent continues today.

Conversely, Congressional appropriations handicapped this deployment bydemobilization, general naval policy and postwar personnel, and operatingfunds reductions. Though reluctant to allocate postwar assets into seeminglyunimportant European and Near Eastern waters, the Navy was pressured by theState Department and the American Relief Administration's leader, HerbertHoover, to deploy necessary forces. Most of these were withdrawn by 1924 andthe European Station assumed the traditional policy of showing the flag.
"This large format, impressively researched book recounts the operations of the USN in and around Europe in the years immediately after the First World War, a time when both the force and the country it served were attempting to come to terms with the new status of 'world power'." --Warship
"After World War I, the U.S. Navy helped ensure compliance with the peace treaty. This excellent book covers activities in European and Middle Eastern waters from 1919 to 1924. It also discusses non-military relief work and U.S. involvement in Russia after the Russian Revolution." --The Ensign
"Still's book provides much needed and meticulously documented insight into this oft-overlooked area of interwar history." --U.S. Military History Review
--Awarded the John Lyman Book Award honorable mention in the category of "U.S. Naval History."
"Victory without Peace concludes Bill Still's majestic trilogy analysing the ebb and flow of American naval activity in European waters from 1867 to inter-war isolationism, as the nation grappled with the realities of becoming a great power, using naval presence to support diplomacy, economic growth and humanitarian missions. While the First World war ended in 1918 the naval effort endured, across a broken continent of collapsed regimes and displaced people, reminding us that armed conflict is only one element of the wider naval mission." --Andrew Lambert, author 21st Century Corbett, Laughton Professor Naval History, Kings College, London
"[A] masterly and absorbing telling of the US Navy operating in the European seas for close on 60 years." --Warships: International Fleet Review
"After Armistice Day in 1918, though most of the U.S. Navy's warships went home, others remained in European waters and engaged in a variety of missions in the Baltic, the Adriatic, the Black Sea, and elsewhere. William N. Still rescues this too often overlooked story in the final volume of his important trilogy on the U.S. Navy in the era of the Great War. In doing so, he also illuminates the broader issues of demobilization, humanitarian aid, and American foreign policy." --Craig L. Symonds, The Ernest J. King Professor of Naval History, U.S. Naval War College and author of World War II at Sea: A Global History
"I highly recommend this outstanding account of the U.S. Navy's diplomatic and peacekeeping operations in northern European waters and the Near East during the immediate post World War I era. William Still skillfully relates how the U.S. Navy's European commanders protected American citizens and property and assisted refugees in the Baltic, Adriatic, Black, and Aegean Seas, and particularly at Smyrna, during the 1920s." --William S. Dudley, Ph.D., Director of Naval History, 1995-2004
"Impressive." --The Northern Mariner / Le marin du nord
"The end of World War I began a period of demobilization for U.S. forces, but the Navy remained heavily engaged in post-war activity for another six years in Europe. The author describes in this hefty volume the operations and diplomacy of the naval units in the Barents, Baltic, Adriatic, Aegean and Black Seas, where ships were engaged in treaty protection of U.S. citizens, providing support for Herbert Hoover's American Relief Administration in rushing aid to Europe, including Russia and Turkey, where Armenians were evacuated. The ships also supported in combat a coalition intervening in the Russian Civil War. The period set a precedent for the U.S. Navy in humanitarian relief operations and showed the value of forward presence." --Seapower
"This is an good book that describes an era of naval history that still affects us in many different ways today but which has received surprisingly little attention from historians. It reminds us that armed conflict is only one element of the much wider naval mission and if we are to be on top of our game we must understand every aspect of sea power. I thoroughly recommend it." --The Australian Military Institute
"This often-overlooked period of United States naval operations is best described as magisterial. It is a comprehensive, deeply researched, brilliantly expounded, and lucidly presented story whose resonance with the Navy's missions in the early twenty-first century is unmistakable. Victory Without Peace is a fitting conclusion to Still's trilogy." --Nautical Research Journal
"This very detailed book describes the naval activities that arose from America's responsibility for executing the naval terms of the Armistice. It shows clearly how those activities were constrained by the parsimony of Congress but how they were generally very effectively completed nevertheless." --Workboat World
"Victory is an essential work and a valuable contribution to understanding the American Navy as it enters the years of the great international naval conferences, limiting tonnages and kinds of warships, and the Kellogg-Briand pact to 'outlaw' war as a means of settling political disputes." - Naval Historical Foundation
William N. Still served in the U.S Navy and was director of the maritime studiesprogram at East Carolina University, USA. He has published several naval historybooks, including the award winning Crisis at Sea: The United States in EuropeanWaters in World War One. He also served as the Secretary of the Navy's scholarin naval history at the Naval History and Heritage Command. He is now retired.
NGR9781682470145
9781682470145
1682470148
Victory Without Peace: The United States Navy in European Waters, 1919-1924 by William N. Still Jr
William N. Still Jr
New
Hardback
Naval Institute Press
2018-10-30
368
N/A
Book picture is for illustrative purposes only, actual binding, cover or edition may vary.
This is a new book - be the first to read this copy. With untouched pages and a perfect binding, your brand new copy is ready to be opened for the first time
Trustpilot