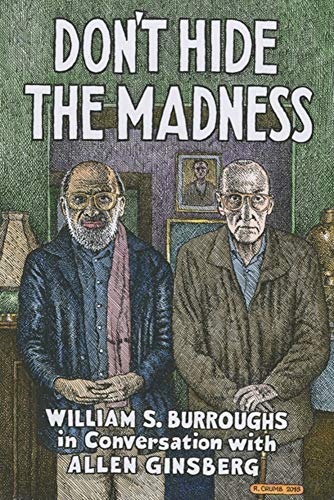 An intense, compelling conversation between legendary Beat icons William S. Burroughs and Allen Ginsberg, featuring photos by Ginsberg, and details of Burroughs' shamanic exorcism of the demon that led him to shoot his wife and drove his work as a writer.

Two seminal figures of the Beat movement, Allen Ginsberg and William S. Burroughs, discuss literary influences and personal history in a never-before-published three-day conversation following the release of the David Cronenberg film of Burroughs' classic novel Naked Lunch. The visit coincided with the shamanic exorcism of the demon that Burroughs believed had caused him to fatally shoot his common law wife, Joan Vollmer Burroughs, in 1951-the event that Burroughs believed had driven his work as a writer. The conversation is interspersed with photographs by Ginsberg revealing Burroughs's daily activities from his painting studio to the shooting range. DON'T HIDE THE MADNESS presents an important, hitherto unpublished primary document of the Beat Generation.
"Lightly but helpfully annotated and peppered with Ginsberg's own snapshots of Burroughs in repose, this must-have resource for beat aficionados will stimulate more casual readers as well with its sense of being in the same room, and thoroughly in tune, with two legendary literary iconoclasts." -Publishers Weekly

"Invaluable to scholars and avid readers who yearn to understand the original Beats." -Rain Taxi

"Devotees of these Beat Generation icons will find these conversations between longtime friends both entertaining and revealing." -Library Journal

"For aficionados of these two literary lights and the Beat movement in general, this is an illuminating artifact and essential addition to the collection." -Washington Independent Review of Books

"Anyone with an interest in these two seminal figures of the Beat movement will like to follow along with the free-flowing discussion." -Seattle Book Review

"A deeply personal and beautiful book. . . . Ginsberg famously edited his interviews and treated them as an art just like his poems, and to read his words unabridged ... is refreshing, and fun.refreshing and fun." -Beatdom

"A surprising page-turner, full of hilarity and intimate asides-transcribed into an extremely readable and satisfying fly-on-the-wall of literary history . . . will make both fanboy and scholar sit up straight at attention. Oh, and the R. Crumb cover portrait of Allen & Bill is magnificent!" -Sensitive Skin Magazine

"A conversation loaded with details, ideas, analyses, and a profound understanding of a moment in American literary history and the people who lived it." -New York Journal of Books

"Quite simply, this book offers unfiltered and never-before-seen insight and understanding into this famous time in American literature. ... Writers today can relate to the processes of the Beats' writings because they are both pushing against the status quo." -BookTrib

"Steven Taylor's transcriptions of Bill and Allen's table talk are so accurate that it is just like being there with them: Bill restless, changing the subject - Allen doggedly pursuing his point. I learned much from it. If only we had them with us now." -Barry Miles, author, Hippie and Call Me Burroughs

"A beautiful book where you are pleasantly sitting with two originators of Beat-ism, amazing to hear them talk with each other touching many different things. I love them so much I will buy more copies of this book." -Gus Van Sant, director, artist, author

"A conversation between two literary geniuses of the 20th century whose impact on worldwide culture is so profound that it touches the fabric of our existence on levels we may not fully comprehend. . . . An endearing and necessary Beat addendum for anyone who feels the shivers of a radical disposition. Steven Taylor, close to both these icons, does a hero-scholar's job of edit and notation. A tangible, tender, and totally engaging tour de force, and balm for the dystopic time we're caught in." -Anne Waldman, feminist, activist, poet, Fast-Speaking Woman, Trickster Feminism

"William Burroughs was a seer, a visionary who was always "now" whether in Underground Comix or Punk Rock. ... From Post-War America, he saw the Ugly Spirit multiplying in its own image, an endless soul killing sickness breaking the dawn's ozone and settling upon the deep state in IIlumanati conspiracies snuffing citizens who fall for the Lie. . . . It's all here, in this futuristic compendium. Get your copy now before the country sinks into senescence or worse. Take the book home to unwind the mummy roll by roll." --Charles Plymell, author, Last Of The Moccasins/ Apocalypse Rose

"William and Allen intersected every critical counter-culture signpost of the late 20th century as confidantes, critics, lovers and true representatives of our radical minds. Let us bask in their beatific banter and glean their energy of intellect, eros and rapacious vision. Straight world be damned!" -Thurston Moore, musician, poet

"Allen and Bill, still talking, all the many years later, still examining life's expanse - much of which they traveled in well documented tandem - now from the far shore. We have their nimble old-age (and age-old) words to guide us still. How lucky we are!" -Lee Ranaldo, writer, musician

"For any fan, student, or scholar of Allen Ginsberg, William Burroughs and the Beat Generation, Don't Hide the Madness is an absolutely essential read. . . . A treasure trove of insight, humor, beauty and wisdom." -S. A. Griffin, Carma Bums "Far and away the best book I've read in a long time. For those who are just discovering the Beat Generation, Burroughs' and Ginsberg's enthralling dinner-table talks will help put a human face on these literary giants. Its like pulling up your own chair and eavesdropping on genius at work. Editor Steven Taylor has done noble work here." -Bill Morgan, author, The Best Minds of My Generation

"Two of the best minds of my generation, are certainly the angel-headed hipsters, Burroughs and Ginsberg; I read them at 18, again at 40 and have fumbled through their brilliance ever since. This book, their dialogue is a 20th century headstone! Like a crab's eye at end of a stick, a penetrating riff on the starry dynamo of America." -Dr. Peter Weller, PhD/Dept. of Art History / UCLA, MANCAT PROD. INC.

"For those of us who missed our chance in meeting Burroughs, books like DON'T HIDE THE MADNESS prove invaluable. They capture a moment in time, in this case a pivotal moment for the late Burroughs, a time of public acceptance and coming to terms with the past. . . . Essential reading for those interested in experiencing Burroughs the man." -Jed Birmingham, RealityStudio

William S. Burroughs was a primary figure of the Beat Generation and a major postmodernist author whose influence is considered to have affected a range of popular culture as well as literature. Burroughs wrote eighteen novels and novellas, including Naked Lunch, Junky, and Queer. Naked Lunch was adapted for the screen in the 1991 award-winning film directed by David Cronenberg. American poet, philosopher, and photographer Allen Ginsberg is considered to be one of the leading figures of both the Beat Generation during the 1950s and the counterculture that soon followed. Among his many published poetry collections, he is best known for Howl and Other Poems, Kaddish and Other Poems, and Collected Poems, 1947-1997. Poet, musician, and ethnomusicologist Steven Taylor toured extensively with Allen Ginsberg from 1976 to 1996, collaborating on music and poetry works. Taylor is a member of the seminal underground rock band The Fugs, and is author of two books of poems and the musical ethnography, False Prophet: Field Notes from the Punk Underground. From 1990 to 2008 he was on the faculty at the Jack Kerouac School of Disembodied Poetics at Naropa University. Currently, he is senior editor at Reality Sandwich. He lives in Brooklyn, NY.
NGR9781941110706
9781941110706
1941110703
Don't Hide the Madness: William S. Burroughs in Conversation with Allen Ginsberg by William S. Burroughs
William S. Burroughs
New
Hardback
Three Rooms Press
2018-11-01
364
N/A
Book picture is for illustrative purposes only, actual binding, cover or edition may vary.
This is a new book - be the first to read this copy. With untouched pages and a perfect binding, your brand new copy is ready to be opened for the first time
Trustpilot