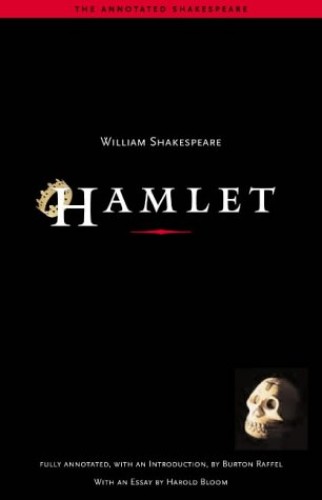 One of the most frequently read and performed of all stage works, Shakespeare's Hamlet isunsurpassed in its complexity and richness. Now the first fully annotated version of Hamlet makesthe play completely accessible to readers in the twenty-first century. It has been carefully assembled with students, teachers, and the general reader in mind. Eminent linguist and translator Burton Raffel offers generous help with vocabulary and usage of Elizabethan English, pronunciation, prosody, and alternative readings of phrases and lines. His on-page annotations provide readers with all the tools they need to comprehend the play and begin to explore its many possible interpretations. This version of Hamlet isunparalleled for its thoroughness and adherence to sound linguistic principles. In his Introduction, Raffel offers important background on the origins and previous versions of the Hamlet story, along with an analysis of the characters Hamlet and Ophelia. And in a concluding essay, Harold Bloom meditates on the originality of Shakespeare's achievement. The book also includes a careful selection of items for "Further Reading."

"This timely edition glosses Shakespeare's words which regularly stump students but which their overly optimistic teachers never notice. This is an edition for the students we actually teach, students for whom Early Modern English is a foreign language. Extremely useful and welcome."-D.E. Richardson, The University of the South (Sewanee)
"If any work deserves a student's closest attention, it is Hamlet. Burton Raffel's fully annotated edition is a teacher's and student's dream: the words are fully explained, and they get a wonderful essay by Harold Bloom as well."-George Soule, Carleton College

"In a market glutted with editions of Shakespeare, this one stands out. The notes are helpful but not overwhelming, making it a great choice for classroom instructors and independent readers alike."-Kathryn Levesque, Choate Rosemary Hall

"This edition is an invaluable resource for teachers and students who want to do justice to the complexity of the play's language."-Tanya Pollard, Assistant Professor of English, Montclair State University

GOR002336637
Hamlet by William Shakespeare
William Shakespeare
The Annotated Shakespeare
Used - Very Good
Paperback
Yale University Press
2003-09-10
288
0300101058
9780300101058
N/A
Book picture is for illustrative purposes only, actual binding, cover or edition may vary.
This is a used book - there is no escaping the fact it has been read by someone else and it will show signs of wear and previous use. Overall we expect it to be in very good condition, but if you are not entirely satisfied please get in touch with us.