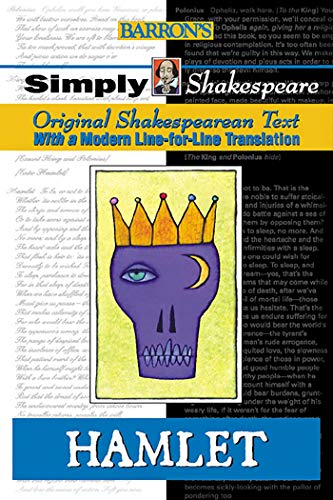 Out of Stock
$18.49
inc. GST
Books in this brand-new, illustrated series contain complete texts of Shakespeare's plays. However, the lines are set up so students can see the bard's original poetic phrases printed side-by-side and line-by-line with a modern "translation" on the facing page. The plays have endured, but over the course of 400+ years, the English language has chan
Very Good
Only 0 left

This tale of the immortal Prince of Denmark delves deeply into the complexities of the human soul as it recounts Hamlet's tragic struggle to avenge his father's death. Books in this new, illustrated series present complete texts of Shakespeare's plays. However, the lines are set up so students can see the bard's original poetic phrases printed side-by-side and line-by-line with a modern "translation" on the facing page.

Starting in the late 1580s and for several decades that followed, Shakespeare's plays were popular entertainment for London's theatergoers. His Globe Theatre was the equivalent of a Broadway theater in today's New York. The plays have endured, but over the course of 400+ years, the English language has changed in many ways which is why today's students often find Shakespeare's idiom difficult to comprehend.

Simply Shakespeare offers an excellent solution to their problem. Introducing each play is a general essay covering Shakespeare's life and times. At the beginning of each of the five acts in every play, a two-page spread describes what is about to take place. The story's background is explained, followed by brief descriptions of key people who will appear in the act, details students should watch for as the story unfolds, discussion of the play's historical context, how the play was staged in Shakespeare's day, and explanation of puns and plays on words that occur in characters' dialogues.

Identifying icons preceding each of these study points are printed in a second color, then are located again as cross-references in the play's original text. For instance, where words spoken by a person in the play offer insights into his or another character's personality, the "Characters" icon will appear as a cross-reference in both the introductory spread and the play proper. Following each act, a closing spread presents questions and discussion points for use as teachers' aids.

Guided by the inspiring format of this fine new series, both teachers and students will come to understand and appreciate the genius of Shakespeare as never before.

William Shakespeare was born in April 1564 in the town of Stratford-upon-Avon, on England's Avon River. When he was eighteen, he married Anne Hathaway. The couple had three children--an older daughter Susanna and twins, Judith and Hamnet. Hamnet, Shakespeare's only son, died in childhood. The bulk of Shakespeare's working life was spent in the theater world of London, where he established himself professionally by the early 1590s. He enjoyed success not only as a playwright and poet, but also as an actor and shareholder in an acting company. Although some think that sometime between 1610 and 1613 Shakespeare retired from the theater and returned home to Stratford, where he died in 1616, others believe that he may have continued to work in London until close to his death.

GOR005956448
Hamlet by William Shakespeare
William Shakespeare
Simply Shakespeare
Used - Very Good
Paperback
Barron's Educational Series
2002-03-01
352
0764120840
9780764120848
N/A
Book picture is for illustrative purposes only, actual binding, cover or edition may vary.
This is a used book - there is no escaping the fact it has been read by someone else and it will show signs of wear and previous use. Overall we expect it to be in very good condition, but if you are not entirely satisfied please get in touch with us.