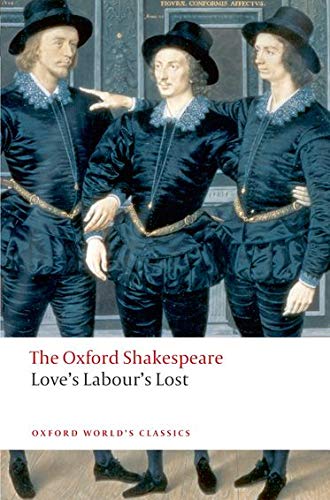 Love's Labour's Lost, now recognized as one of the most delightful and stageworthy of Shakespeare's comedies, came into its own both on the stage and in critical esteem only during the 1930s and 1940s, after three hundred years of neglect by the theatre and undervaluation and misuse by critics. The Introduction to this new edition pays particular attention to this process of rehabilitation. The text, based on the quarto of 1598 and taking full account of the extensive scholarly study that text has received over recent years, rests on the hypothesis that the quarto goes back, probably by way of `lost' quarto, to an authorial manuscript representing the play in a state prior to `fair copy'. If this is so, the quarto takes on a special significance because through it we can watch Shakespeare in the act of composition, improvising, changing his mind, and revising as his play develops under his hand. The editor offers a number of new readings of difficult and disputed passages, together with some suggestions about the way in which the play's notorious `tangles' may have come about. A detailed commentary offers full and helpful guidance to the play's scintillating language. ABOUT THE SERIES: For over 100 years Oxford World's Classics has made available the widest range of literature from around the globe. Each affordable volume reflects Oxford's commitment to scholarship, providing the most accurate text plus a wealth of other valuable features, including expert introductions by leading authorities, helpful notes to clarify the text, up-to-date bibliographies for further study, and much more.

`Hibbard lucidly expounds the intricately patterned structure of his play ... and he dispatches the largely distracting question of its 'topicality' with heartening promptness.' English Studies, Volume 72, Number 6, December 1991
`This Oxford text of Love's Labour's Lost is lucidly informative, scrupulous but concise,. and in general a model of restrained and level-headed editing.' Cedric Watts, University of Sussex, Review of English Studies, Vol. 43, 8/92
'Stanley Wells' OUP Complete Works of Shakespeare is now eight years old and has spawned a new Oxford Shakespeare which appears now in splendidly affordable volumes in that nonpareil of libraries of good reading The World's Classics.' The Oxford Times

The late George Hibbard was Emeritus Professor of English at the University of Waterloo, Ontario, Canada.

List of illustrations; Introduction; The Play; The Date and `Sources'; The Text; Editorial Procedures; Abbreviations and references; Love's Labour's Lost; Appendix A: Two `False Starts'; Appendix B: Alterations to lineation; Appendix C: The music for `The Hit It'; Appendix D: The name of Armado's page; Index

GOR004763908
Love's Labour's Lost: The Oxford Shakespeare by William Shakespeare
William Shakespeare
Oxford World's Classics
Used - Very Good
Paperback
Oxford University Press
2009-11-30
272
0199536813
9780199536818
N/A
Book picture is for illustrative purposes only, actual binding, cover or edition may vary.
This is a used book - there is no escaping the fact it has been read by someone else and it will show signs of wear and previous use. Overall we expect it to be in very good condition, but if you are not entirely satisfied please get in touch with us.