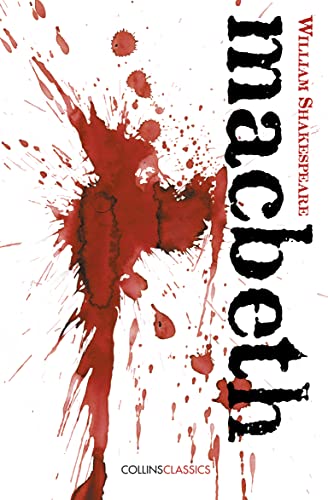 'Stars, hide your fires;
Let not light see my black and deep desires.'

Fresh from victory on the battlefield, the celebrated general and nobleman Macbeth receives a prophecy from three witches that he will one day become king of Scotland. Driven by his own ambition and that of his power-hungry wife, he murders King Duncan and seizes the throne for himself. Forced to commit murder again and again to maintain their grip on power, Macbeth and Lady Macbeth become haunted by guilt and paranoia, falling into a spiral of madness and, eventually, death.

Believed to have been written between 1599 and 1606, Macbeth is one of Shakespeare's darkest and most violent tragedies, and has inspired countless stage and screen adaptations.

William Shakespeare is widely regarded as the greatest playwright the world has seen. He produced an astonishing amount of work; 37 plays, 154 sonnets, and 5 poems. He died on 23rd April 1616, aged 52, and was buried in the Holy Trinity Church, Stratford.
GOR010036322
9780008182588
0008182582
Macbeth (Collins Classics) by William Shakespeare
William Shakespeare
Collins Classics
Used - Very Good
Paperback
HarperCollins Publishers
2016-02-22
272
N/A
Book picture is for illustrative purposes only, actual binding, cover or edition may vary.
This is a used book - there is no escaping the fact it has been read by someone else and it will show signs of wear and previous use. Overall we expect it to be in very good condition, but if you are not entirely satisfied please get in touch with us
Trustpilot