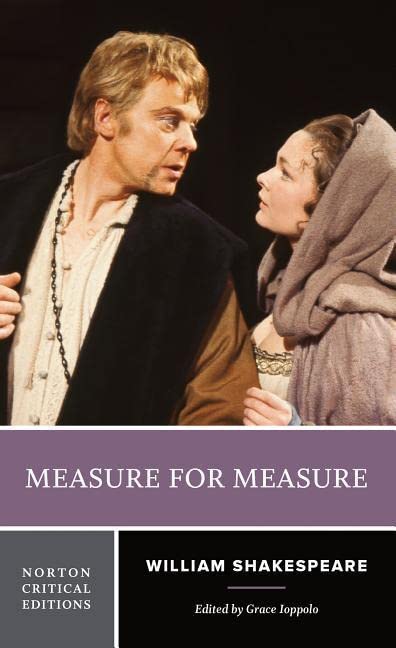 Measure for Measure
by William Shakespeare

In Stock
$22.49
inc. GST
This Norton Critical Edition looks at the full range of opinion and interpretation of this major play from its origins to the present day, from its "genius" (William Hazlitt) to its being a "hateful work, although Shakespearean throughout" (Samuel Taylor Coleridge), and beyond.
Very Good
Only 3 left

Measure for Measure by William Shakespeare

The Norton Critical Edition is based on the 1623 First Folio text, the only authoritative edition of the play. The editor has modernized spelling but preserves, for the most part, the original lineation and characteristically heavy punctuation. The text of Measure for Measure is accompanied by a full introduction, a note on the text, textual variants, and related illustrations.

"Sources" considers the probable, primary, and analogous sources Shakespeare drew upon while composing Measure for Measure, including excerpts from G. B. Giraldi Cinthio's Hecatommithi and The Tragedy of Epitia, King James I's Basilikon Doron, and-most directly-George Whetstone's The History of Promos and Cassandra.

"Adaptations and Responses" reprints alternative versions of the play: William D'avenant's The Law Against Lovers (1662), Charles Gildon's Measure of Measure, or, Beauty the Best Advocate (1700), and Charles Marowitz's postmodern version (1975).

A Selected Bibliography is also included.

Grace Ioppolo is the founder and director of the Henslowe-Alleyn Digitisation Project and is Professor of Shakespearean and Early Modern Drama in the Department of English and American Literature at the University of Reading, England. She is the author of Dramatists and Their Manuscripts in the Age of Shakespeare, Jonson, Middleton, and Heywood: Authorship, Authority, and the Playhouse (2006) and Revising Shakespeare (1991). She has edited Shakespeare's King Lear for Norton and has published widely on textual transmission, the history of the book and literary and historical manuscripts, most recently as the co-editor of Elizabeth I and the Culture of Writing (2007). She is the General Editor of The Collected Works of Thomas Heywood, forthcoming 2012-15.

GOR009306715
Measure for Measure by William Shakespeare
William Shakespeare
Norton Critical Editions
Used - Very Good
Paperback
WW Norton & Co
2009-11-06
272
0393931714
9780393931716
N/A
Book picture is for illustrative purposes only, actual binding, cover or edition may vary.
This is a used book - there is no escaping the fact it has been read by someone else and it will show signs of wear and previous use. Overall we expect it to be in very good condition, but if you are not entirely satisfied please get in touch with us.