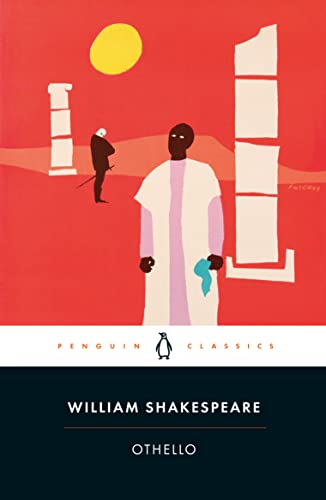 Out of Stock
$18.49
inc. GST
A popular soldier and newly married man, Othello seems to be in an enviable position. And yet, when his supposed friend Iago sows doubts in his mind about his wife Desdemona's fidelity, and his friend Cassio's true intentions, he is gradually consumed by suspicion.
Good
Only 0 left

Inexorably poisoned against the woman he loves by his trusted friend Iago, Shakespeare's Othello is a timeless tragic figure. This Penguin Shakespeare edition is edited by Kenneth Muir with an introduction by Tom McAlindon.

'O! beware, my lord, of jealousy;
It is the green-eyed monster which doth mock
The meat it feeds on.'

A popular soldier and newly married man, Othello seems to be in an enviable position. And yet, when his supposed friend Iago sows doubts in his mind about his wife Desdemona's fidelity, and his friend Cassio's true intentions, he is gradually consumed by suspicion. In this powerful tragedy, innocence is corrupted and trust is eroded as every relationship is drawn into a tangled web of jealousies.

This book contains a general introduction to Shakespeare's life and Elizabethan theatre, a separate introduction to Othello, a chronology, suggestions for further reading, an essay discussing performance options on both stage and screen, and a commentary.

William Shakespeare (1564-1616) was born to John Shakespeare and Mary Arden some time in late April 1564 in Stratford-upon-Avon. He wrote about 38 plays (the precise number is uncertain), many of which are regarded as the most exceptional works of drama ever produced, including Romeo and Juliet (1595), Henry V (1599), Hamlet (1601), Othello (1604), King Lear (1606) and Macbeth (1606), as well as a collection of 154 sonnets, which number among the most profound and influential love-poetry in English.

William Shakespeare was born in late April 1564 in Stratford-upon-Avon and died in 1616. He is widely regarded as the greatest writer in the English language and the world's pre-eminent dramatist.

Stanley Wells is Emeritus Professor of the University of Birmingham and Honorary President of the Shakespeare Birthplace Trust.

Tom McAlindon is Emeritus Professor of English at the University of Hull.

GOR007080632
Othello by William Shakespeare
William Shakespeare
Used - Good
Paperback
Penguin Books Ltd
2015-08-06
272
0141396512
9780141396514
N/A
Book picture is for illustrative purposes only, actual binding, cover or edition may vary.
This is a used book - there is no escaping the fact it has been read by someone else and it will show signs of wear and previous use. Overall we expect it to be in very good condition, but if you are not entirely satisfied please get in touch with us.