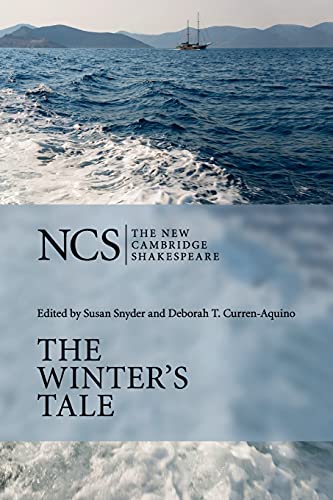 The Winter's Tale
by William Shakespeare

Used Price
$24.99
inc. GST
Free Shipping in Australia
The Winter's Tale is one of Shakespeare's most varied, theatrically self-conscious, and emotionally wide-ranging plays. This 2007 edition provides a newly-edited text, a comprehensive introduction that takes into account current critical thinking, and a detailed commentary on the play's language designed to make it easily accessible to contemporary readers.
Reviews:
Trustpilot
Very Good

The Winter's Tale by William Shakespeare

The New Cambridge Shakespeare appeals to students worldwide for its up-to-date scholarship and emphasis on performance. The series features line-by-line commentaries and textual notes on the plays and poems and an extensive introduction. The Winter's Tale is one of Shakespeare's most varied, theatrically self-conscious, and emotionally wide-ranging plays. Much of the play's copiousness inheres in its generic intermingling of tragedy, comedy, romance, pastoral, and the history play. In addition to dates and sources, the introduction attends to iterative patterns, the nature and cause of Leontes' jealousy, the staging and meaning of the bear episode, and the thematic and structural implications of the figure of Time. Special attention is paid to the ending and its tempered happiness. Performance history is integrated throughout the introduction and commentary. Appendices include the theatrical practice of doubling.

GOR001885934
The Winter's Tale by William Shakespeare
William Shakespeare
The New Cambridge Shakespeare
Used - Very Good
Paperback
Cambridge University Press
2007-03-08
306
0521293731
9780521293730
N/A
Book picture is for illustrative purposes only, actual binding, cover or edition may vary.
This is a used book - there is no escaping the fact it has been read by someone else and it will show signs of wear and previous use. Overall we expect it to be in very good condition, but if you are not entirely satisfied please get in touch with us.