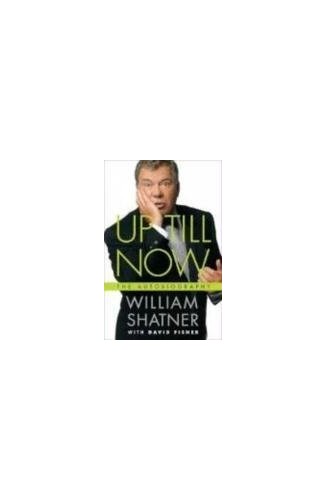 Up Till Now
by William Shatner

In Stock
$11.49
+10% GST
The long-awaited autobiography of one of the most beloved entertainers in the world.
Very Good
Only 1 left

Up Till Now Summary

Up Till Now by William Shatner

William Shatner gets the joke about William Shatner. In fact, most of the time he's the one telling it. His self-effacing attitude, so perfectly parodied in the bombastic character he now plays on Boston Legal, Denny Crane, is one of the reasons for his huge popularity. While best known for his creation of Captain James T. Kirk, commander of the starship Enterprise on Star Trek, William Shatner has been a working actor for more than half a century. He has experienced all the ups (the awards and acclaim) and the downs (having to live for a time in the truck bed of his camper when he couldn't get work) that are a part of the actor's world.

In Up Till Now he tells us about his remarkable life, from training as a Shakespearan actor under Sir Tyrone Guthrie to his time on Broadway, his movie career and, of course, his successful tv series. He has worked with an extraordinary range of actors, among them Spencer Tracy, Burt Lancaster, Marlene Dietrich, Judy Garland, Walter Matthau, Sandra Bullock, Ben Stiller and Robert DeNiro. He also writes, with glee, about some of his less successful ventures, including Incubus , the only feature ever made entirely in Esperanto. As funny, charming and self-deprecating as the man himself, this book will delight his many fans of all ages.

As well as playing Captain Kirk in the Star Trek tv series and in seven spin-off films, William Shatner also starred in the popular series T.J. Hooker and recently won an Emmy and Golden Globe for his role in Boston Legal. In addition to his prolific career as an actor, he has worked as a musician, author, producer and director.

GOR001938654
Up Till Now by William Shatner
William Shatner
Used - Very Good
Paperback
Pan Macmillan
2008-05-16
368
0283070641
9780283070648
N/A
Book picture is for illustrative purposes only, actual binding, cover or edition may vary.
This is a used book - there is no escaping the fact it has been read by someone else and it will show signs of wear and previous use. Overall we expect it to be in very good condition, but if you are not entirely satisfied please get in touch with us.