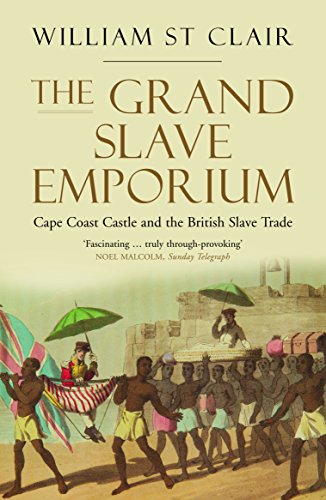 From the handsome building of Cape Coast Castle on the Atlantic shore African men, women and children were sold as slaves and carried across the ocean. This book tells the story of the castle and some of the people who lived, worked or were imprisoned within its walls.

From this handsome building on the Atlantic shore African men, women and children were sold as slaves and carried across the ocean. In a truly original book, by telling the story of the castle and some of the people who lived, worked or were imprisoned within its walls, William St Clair is able to illuminate a panorama of modern history which in its entirety is hard to comprehend.
Here is an extraordinary story: the grotesqueness of African slavery sitting cheek by jowl with a God-fearing European brutality ... The great strength of St Clair's narrative is to make these ancient walls speak for the armies of the dead, black and white, whose precarious lives were bounded and imprisoned by the castle's culture. Cape Coast Castle survives as a reminder of the grim story of Atlantic slavery, brilliantly reconstructed here in an utterly novel and affecting way. -- James Walvin * University of York *
fascinating... [a] truly thought-provoking book -- Noel Malcolm * Sunday Telegraph Seven *
St Clair's cool eye dwells on the details that provide the monument's bizarre nad haunting resonance ... [he] shines a light at the heart of the shame. * Economist *
Anyone reading William St Clair's superb book will feel astonished, and perhaps ashamed, at the hugely profitable slaving enterprise in this country - not so long ago - with which The Grand Slave Emporium confronts us. -- Jonathan Mirsky * Literary Review *
St Clair delivers a series of small-scale, human tragedies which paint a clear picture of how vital and mysterious this 'trading post' was ... If only all historical analysis were this measured and, more importantly, this entertaining. -- David Jenkins * Time Out *
A most original and remarkable book ... St Clair catches for us the sense of actually being there at the time as witnesses. * African Business *
A work of superb scholarly detection, The Grand Slave Emporium anticipates the bicentenary of the abolition of the British slave trade in 2007, and does so with a fitting dignity. -- Ian Thomson * Guardian *
An absorbing study of an ugly but crucial swathe of British history. -- Nina Caplan * Metro *
This timely book gives a lively perspective to that odious commerce ...[it] is like a television documentary where the governors, the slavers and the African chiefs talk, without a camera-hugging presenter. -- Graham Gendall Norton * History Today *
St Clair opens a rare archive in the Public Record Office to give an account of British slavers and their suppliers in Africa. It's an admirable, succinct work of historical research, and tells its appalling story stoically to great effect. -- Marina Warner, Times Literary Supplement * Books of the Year *
Vividly recreates the horrors of the slave trade which operated from Cape Coast Castle on the Ghanaian coast, drawing on a newly discovered archive. -- Jane Ridley, Spectator * Books of the Year *
A powerful, well-written book which raises hard questions about the African slave trade. By allowing the records of the castle to tell their own strange, contrary and horrifying story, the reader is brought close to a time and place of monumental tragedy. Everyone who is interested in the workings of the human heart and the divided self should read this. * Lorna Goodison *
[A] rare historical account that manages to provide us with a story that is both sensitively modulated in its humanity and yet unflinching in speaking about things that often invoke horror, pain and a great deal of bewilderment. It is well informed and exquisitely written. -- Ato Quayson, Author of Postcolonialism: Theory, Practice or Process?
In a deeply researched and engagingly written account of Cape Coast Castle and its environs in present-day Ghana, award-winning biographer William St Clair has recreated the 'life' and traced the evolution of the 'grand emporium' of the British slave trade from its beginnings in the seventeenth century, through its history as a site of misery for untold numbers of enslaved Africans, to its present status as site of memory for their descendants. Using manuscript evidence as well as published records, St Clair has recovered the voices and identities of scores of people who left Africa through the Castle's 'door of no return', and of those Europeans and Africans who profited by forcing them through it. The result is an elegantly constructed and balanced reconstruction of the Castle and its inhabitants. -- Vincent Carretta, Author of Equiano the African
William St Clair is a Senior Research Fellow of Trinity College, Cambridge. His books include Lord Elgin and the Marbles, The Godwins and the Shelleys and, most recently, The Reading Nation in the Romantic Period. At the end of a Civil Service career he was under-secretary with responsibility for Treasury control of the Civil Service. He lives in London and Cambridge.
GOR002998418
9781861979889
1861979886
The Grand Slave Emporium: Cape Coast Castle and the British Slave Trade by William St Clair
William St Clair
Used - Good
Paperback
Profile Books Ltd
2007-03-01
304
N/A
Book picture is for illustrative purposes only, actual binding, cover or edition may vary.
This is a used book - there is no escaping the fact it has been read by someone else and it will show signs of wear and previous use. Overall we expect it to be in very good condition, but if you are not entirely satisfied please get in touch with us
Trustpilot