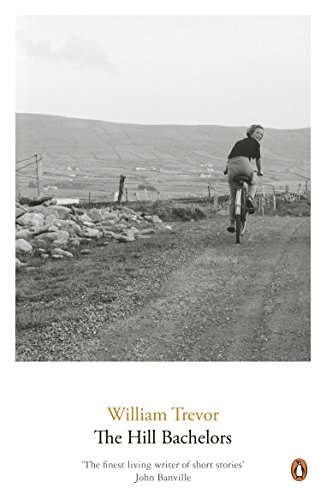 The Hill Bachelors
by William Trevor

Used Price
$27,99
inc. GST
Free Shipping in Australia
Three people are frozen in a conspiracy of silence that prevents love's consummation; a nine-year-old dreams that a movie part heals her fragmented family life; a brother and sister forge a new life amid terrible beauty of Ireland after Rebellion; and in title story, a man chooses between his longtime love and a life of solitude on family farm.
Reviews:
Trustpilot
Very Good Good

The Hill Bachelors by William Trevor

The Hill Bachelors is a stunning meditation on men and women and the heartbreak of missed opportunities: three people are frozen in a conspiracy of silence that prevents love's consummation; a nine-year-old dreams that a movie part will heal her fragmented family life; a brother and sister forge a new life amid the terrible beauty of Ireland after the Rebellion; and in the title story, a young man chooses between his longtime love and a life of solitude on the family farm. These twelve beautifully rendered tales reveal Trevor's unrivalled compassion for the human condition.

'His tight, perfected short stories - each an astonishing performance in which melodramatic situations are turned, by acute psychological insight, into classic drama - make him the greatest living writer in English' Weekly Standard

Readers of The Story of Lucy Gault and Love and Summer will adore The Hill Bachelors. It will also be cherished by readers of Colm Toibin and William Boyd.

William Trevor was born in County Cork in 1928 and spent his childhood in various provincial Irish towns. He went to Trinity College, Dublin and then to England in 1953. He now lives in Devon. In 1977 William Trevor received an honorary CBE in recognition of his services to literature, and in 1998 he was awarded the prestigious David Cohen British Literature Prize for a lifetime's achievement in writing.

GOR001215659
The Hill Bachelors by William Trevor
William Trevor
Used - Very Good
Paperback
Penguin Books Ltd
2001-07-05
256
0140294694
9780140294699
Short-listed for Irish Times Literary Prize,Irish Fiction 2001
Book picture is for illustrative purposes only, actual binding, cover or edition may vary.
This is a used book - there is no escaping the fact it has been read by someone else and it will show signs of wear and previous use. Overall we expect it to be in very good condition, but if you are not entirely satisfied please get in touch with us.