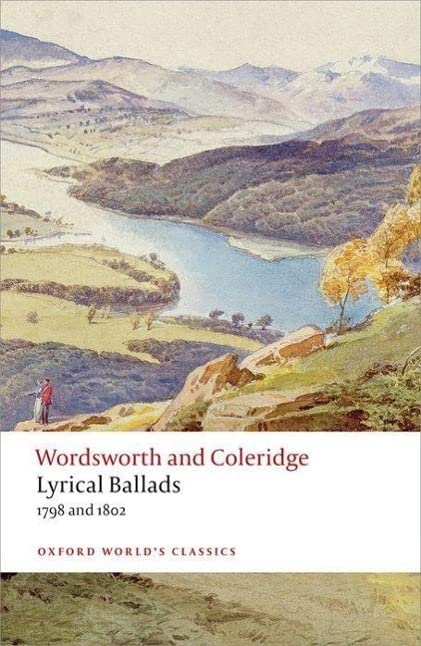 In Stock
18,49 $
inc. GST
Wordsworth and Coleridge's joint collection of poems has often been singled out as the founding text of English Romanticism. This is the only edition to print both the original 1798 collection and the expanded 1802 edition, with Wordsworth's famous Preface. It includes important letters, a wide-ranging introduction and generous notes.
Very Good
Only 2 left

'Listen, Stranger!' Wordsworth and Coleridge's joint collection of poems has often been singled out as the founding text of English Romanticism. Within this initially unassuming, anonymous volume were many of the poems that came to define their age and which have continued to delight readers ever since, including 'The Rime of the Ancient Mariner', the 'Lucy' poems, 'Lines written a few miles above Tintern Abbey', 'A Slumber did my Spirit seal' and many more. Wordsworth's famous Preface is a manifesto not just for Romanticism but for poetry in general. This is the only edition to print both the original 1798 collection and the expanded 1802 edition, with the fullest version of the Preface and Wordsworth's important Appendix on Poetic Diction. It offers modern readers a sense of what it was like to encounter Lyrical Ballads for the first time, and to see how it developed. Important letters are included, as well as a wide-ranging introduction and generous notes. ABOUT THE SERIES: For over 100 years Oxford World's Classics has made available the widest range of literature from around the globe. Each affordable volume reflects Oxford's commitment to scholarship, providing the most accurate text plus a wealth of other valuable features, including expert introductions by leading authorities, helpful notes to clarify the text, up-to-date bibliographies for further study, and much more.

For students of the Lyrical Ballads as one of the key texts of Romanticism, Staffords new edition, juxtaposing the two 1798 and 1802 versions, is highly recommendable as it finely lays out both the reader response dimension of its poetics and the contexts of its production. * Helga Schwalm, The BARS Review *
Lyrical Ballads, in case you missed it, is, quite simply, possibly the single most important collection of poems in English ever published. * Nicholas Lezard, Guardian *
An invaluable resource for both teachers and students of Romantic literature... elegant, informative and clearly written introduction, a lucid overview of the Lyrical Ballads' transformation between 1798 and 1802... warmly recommended. * Susan Valladares, Reviews Editor for the British Association for Romantic Studies' Bulletin & Review and Lecturer in English, Worcester College, Oxford *
Stafford's new edition, juxtaposing the two 1798 and 1802 versions, is highly recommendable * Helga Schwalm, BARS Review *

Fiona Stafford has written widely on Romantic literature. Her books include Reading Romantic Poetry (Wiley Blackwell, 2012), and Local Attachments: the Province of Poetry (Oxford, 2010). She has edited Jane Austen's Pride and Prejudice for Oxford World's Classics.

GOR006432315
Lyrical Ballads: 1798 and 1802 by William Wordsworth
William Wordsworth
Oxford World's Classics
Used - Very Good
Paperback
Oxford University Press
2013-07-11
432
0199601968
9780199601967
N/A
Book picture is for illustrative purposes only, actual binding, cover or edition may vary.
This is a used book - there is no escaping the fact it has been read by someone else and it will show signs of wear and previous use. Overall we expect it to be in very good condition, but if you are not entirely satisfied please get in touch with us.