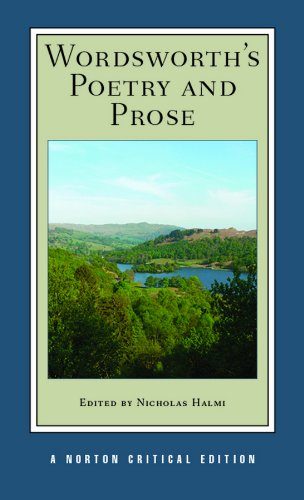 The most accessible edition of Wordsworth's poetry and prose, prepared to meet the needs of both students and scholars.

This Norton Critical Edition presents a generous selection of William Wordworth's poetry (including the thirteen-book Prelude of 1805) and prose works along with supporting materials for in-depth study. Together, the Norton Critical Editions of Wordsworth's Poetry and Prose and The Prelude: 1799, 1805, 1850 are the essential texts for studying this author.

Wordsworth's Poetry and Prose includes a large selection of texts chronologically arranged, thereby allowing readers to trace the author's evolving interests and ideas. An insightful general introduction and textual introduction precede the texts, each of which is fully annotated. Illustrative materials include maps, manuscript pages, and title pages.

The volume also includes a Chronology, a Biographical Register, a Selected Bibliography, and an Index of Titles and First Lines of Poems.
Nicholas Halmi is Professor of English and Comparative Literature at the University of Oxford and Margaret Candfield Fellow of University College, Oxford. He is the author of The Genealogy of the Romantic Symbol (2007) and numerous articles on British and German Romanticism, editor of Fearful Symmetry: A Study of William Blake in the Collected Works of Northrop Frye (2004), co-editor (with Paul Magnuson and Raimonda Modiano) of the Norton Critical Edition of Coleridge's Poetry and Prose (2003), textual editor of the Opus Maximum in The Collected Works of Samuel Taylor Coleridge (2002), and an advisory editor of Oxford Scholarly Editions Online.
GOR007299559
9780393924787
0393924785
Wordsworth's Poetry and Prose by William Wordsworth
William Wordsworth
Norton Critical Editions
Used - Very Good
Paperback
WW Norton & Co
2014-02-14
800
N/A
Book picture is for illustrative purposes only, actual binding, cover or edition may vary.
This is a used book - there is no escaping the fact it has been read by someone else and it will show signs of wear and previous use. Overall we expect it to be in very good condition, but if you are not entirely satisfied please get in touch with us
Trustpilot