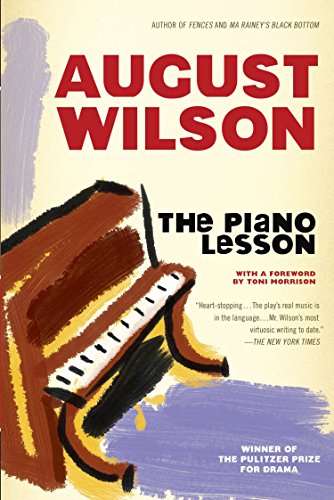 The Piano Lesson
by Wilson August

In Stock
$11.99
inc. GST
Set in 1936, The Piano Lesson is a powerful new play from the Pulitzer Prize-winning author of Fences and Ma Rainey's Black Bottom. A sister and brother fight over a piano that has been in the family for three generations, creating a remarkable drama that embodies the painful past and expectant future of black Americans.
Very Good
Only 1 left

The Piano Lesson by Wilson August

Winner of the Pulitzer Prize for Drama and winner of the New York Drama Critics Circle Award for Best Play, this modern American classic is about family, and the legacy of slavery in America.

August Wilson has already given the American theater such spell-binding plays about the black experience in 20th-century America as Ma Rainey's Black Bottom, Joe Turner's Come and Gone, and the Pulitzer Prize-winning Fences. In his second Pulitzer Prize-winner, The Piano Lesson, Wilson has fashioned perhaps his most haunting and dramatic work.

At the heart of the play stands the ornately carved upright piano which, as the Charles family's prized, hard-won possession, has been gathering dust in the parlor of Berniece Charles's Pittsburgh home. When Boy Willie, Berniece's exuberant brother, bursts into her life with his dream of buying the same Mississippi land that his family had worked as slaves, he plans to sell their antique piano for the hard cash he needs to stake his future. But Berniece refuses to sell, clinging to the piano as a reminder of the history that is their family legacy. This dilemma is the real "piano lesson," reminding us that blacks are often deprived both of the symbols of their past and of opportunity in the present.


"Heart-stopping... The play's real music is in the language... Mr. Wilson's most virtuosic writing to date."--The New York Times

GOR003730663
The Piano Lesson by Wilson August
Wilson August
Used - Very Good
Paperback
Penguin Putnam Inc
1990-12-01
144
0452265347
9780452265349
Winner of Pulitzer Prize (Drama/Theater) 1990
Book picture is for illustrative purposes only, actual binding, cover or edition may vary.
This is a used book - there is no escaping the fact it has been read by someone else and it will show signs of wear and previous use. Overall we expect it to be in very good condition, but if you are not entirely satisfied please get in touch with us.