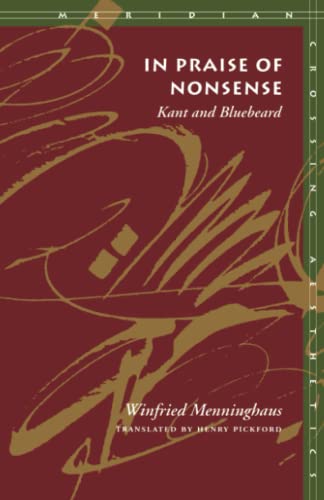 In Praise of Nonsense by Winfried Menninghaus

Ludwig Tieck's 1797 rewriting of Charles Perrault's famous Bluebeard tale (1697) explicitly claims to be an arabesque book without any sense and coherence. The author's close reading of this capricious narrative, based on Kant's theory of what it means to produce nonsense, reveals a specifically Romantic type of nonsense.

In Praise of Nonsense: Kant and Bluebeard by Winfried Menninghaus

Shells, leafwork, picture frames, hummingbirds, wallpaper decorations, hems of clothing-such are the examples Kant's Critique of Judgment offers for a free and purely aesthetic beauty. Menninghaus's book demonstrates that all these examples refer to a widely unknown debate on the arabesque and that Kant, in displacing it, addresses genuinely modern phenomena. The early Romantic poetics and literature of the arabesque follow and radicalize Kant's move.

Menninghaus shows parergonality and nonsense to be two key features in the spread of the arabesque from architecture and the fine arts to philosophy and finally to literature. On the one hand, comparative readings of the parergon in Enlightenment aesthetics, Kant, and Schlegel reveal the importance of this term for establishing the very notion of a self-reflective work of art. On the other hand, drawing on Kant's posthumous anthropological notebooks, Menninghaus extrapolates an entire Kantian theory of what it means to produce nonsense and why the Critique of Judgment defines genius precisely through the power (as well as the dangers) of doing so.

Ludwig Tieck's 1797 rewriting of Charles Perrault's famous Bluebeard tale (1697) explicitly claims to be an arabesque book without any sense and coherence. Menninghaus's close reading of this capricious narrative reveals a specifically Romantic-as opposed, say, to a Victorian or dadaistic-type of nonsense. Benjamin's as well as Propp's, Levi-Strauss's, and Meletinskij's oppositions of myth and fairy tale lend additional credit to a Romantic poetics that inaugurates universal poetry while performing a bizarre trajectory through arabesque ornament, nonsense, parergonality, and the fairy tale.

Winfried Menninghaus teaches at the Freie Universitat Berlin and at Yale University.
1. Introduction: nonsense, Victorian nonsense, Romantic nonsense 2. Kant on 'nonsense', 'laughing', and 'caprice' 3. The poetics of nonsense and the early romantic thoery of the fairy tale 4. Between the addition and subtraction of sense - Charles Perrault's La Barbe-Bleue 5. 'A book without and coherence' - Ludwig Tieck's The Seven Wives of Bluebeard 6. Suspensions of 'sense' in Genre theories of the fairy tale Notes Bibliography.
GOR011382947
9780804729529
0804729522
In Praise of Nonsense: Kant and Bluebeard by Winfried Menninghaus
Winfried Menninghaus
Meridian: Crossing Aesthetics
Used - Very Good
Paperback
Stanford University Press
19991001
272
null null null null null null null null null null
Book picture is for illustrative purposes only, actual binding, cover or edition may vary.
This is a used book - there is no escaping the fact it has been read by someone else and it will show signs of wear and previous use. Overall we expect it to be in very good condition, but if you are not entirely satisfied please get in touch with us
Trustpilot