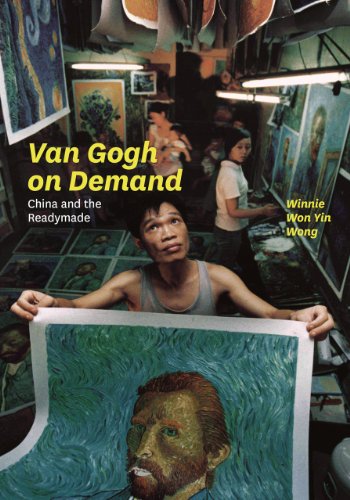 In Stock
$76.99
inc. GST
In the Guangdong province in southeastern China lies Dafen, a village that houses thousands of workers who paint Van Goghs, Da Vincis, and Warhols. The author shows how Dafen's workers force us to reexamine our expectations about the cultural function of creativity and imitation, and the role of Chinese workers in redefining global art.
Very Good
Only 1 left

Van Gogh on Demand: China and the Readymade by Winnie Won Yin Wong

In the Guangdong province in southeastern China lies Dafen, a village that houses thousands of workers who paint Van Goghs, Da Vincis, Warhols, and other Western masterpieces, producing an astonishing five million paintings a year. To write about life and work in Dafen, Winnie Wong infiltrated this world, investigating the claims of conceptual artists who made projects there; working as a dealer; apprenticing as a painter; surveying merchants in Europe, Asia, and America; establishing relationships with local leaders; and organizing a conceptual art show for the Shanghai World Expo. The result is Van Gogh on Demand, a fascinating book about a little-known aspect of the global art world - one that sheds surprising light on our understandings of art, artists, and individual genius. Confronting difficult questions about the definition of art, the ownership of an image, and the meaning of imitation and appropriation, Wong shows how a plethora of artistic practices joins Chinese migrant workers, propaganda makers, and international artists together in a global supply chain of art and creativity. She examines how Berlin-based conceptual artist Christian Jankowski, who collaborated with Dafen's painters to reimagine the Dafen Art Museum, unwittingly appropriated a photojournalist's intellectual property. She explores how Zhang Huan, a radical performance artist from Beijing's East Village, prompted propaganda makers to heroize the female artists of Dafen village. Through these cases, Wong shows how Dafen's workers force us to reexamine our expectations about the cultural function of creativity and imitation, and the role of Chinese workers in redefining global art. Providing a valuable account of art practices in a period of profound global cultural shifts and an ascendant China, Van Gogh on Demand is a rich and detailed look at the implications of a world that can offer countless copies of everything that has ever been called "art."

"Van Gogh on Demand shines. . . . [A] fantastically detailed exploration of a topic which touches the heart of many of the issues surrounding China's economic rise."-- "South China Morning Post"
"A fascinating blend of ethnography and art history."
-- "Art Practical"
"A penetrating analysis of how the artistic theories of the Duchampian ready-made and their successors in conceptual art practice outside China can be applied to illuminate the history of these Chinese production processes which reciprocally bring the notion of ready-made into focus. . . . An important and valuable book, the first on a long-neglected subject."
-- "China Information"
"Based on a thoughtful reading of modern and contemporary art theory, lengthy fieldwork, and practical artistic and curatorial engagement with the world of Dafen artists, Van Gogh on Demand addresses some of the most demanding--and not easily resolved--issues of culture and production. Wong skillfully untangles the complicated skein of interconnections between the realms of traditional practice, contemporary Chinese art, mass-scale production, copying, and art circulation in the global marketplace. Compelling, fluent, and highly quotable, this book is a major contribution to the study of China, modernism, postmodernism, and globalization."-- "Geremie Barme, Australian National University"
"Seamlessly weaving critical theories, empirical observations, and thorough awareness to the context, individual chapters in Van Gogh on Demand are tightly composed and thoroughly articulated."-- "Twentieth-Century China"
"Vividly describing a place that is amazing to learn about and fascinating as a story, Van Gogh on Demand is so engagingly written that we are drawn from chapter to chapter in a state of increasing interest that often turns to excitement. Wong tells us much not only about the highly specific kind of artistic production that prevails at Dafen, but also about the international art world and the role of Dafen in the kind of contemporary modernity that China is striving to construct. The convergence of these different worlds is thoroughly and brilliantly shown to throw a fresh light on postmodern appropriation, quotation, and irony. These insights make this book both a persuasive piece of participant observation cultural anthropology and an original instance of contemporary art historical writing."-- "Terry Smith, University of Pittsburgh"
"Winnie Won Yin Wong's Van Gogh on Demand: China and the Readymade not only overturns accounts of Dafen as a factory full of exploited assembly-line painters, but also unsettles contemporary art's unspoken hierarchies and topples modernist and postmodernist assumptions about originality, authenticity, and authorship. . .Wong's fluid movement between--and equally sophisticated discussions of--contemporary art, the social contexts of post-socialist urban China, popular culture, and state-controlled media pose a provocative model (or gao to use the word of Dafen) for art-historical research and viewing art amid globalization."-- "caa Reviews"

Winnie Wong is a junior fellow in the Society of Fellows at Harvard University. She lives in Cambridge, MA, and Shanghai.

GOR010573428
Van Gogh on Demand: China and the Readymade by Winnie Won Yin Wong
Winnie Won Yin Wong
Used - Very Good
Paperback
The University of Chicago Press
2014-04-23
384
022602489X
9780226024899
N/A
Book picture is for illustrative purposes only, actual binding, cover or edition may vary.
This is a used book - there is no escaping the fact it has been read by someone else and it will show signs of wear and previous use. Overall we expect it to be in very good condition, but if you are not entirely satisfied please get in touch with us.