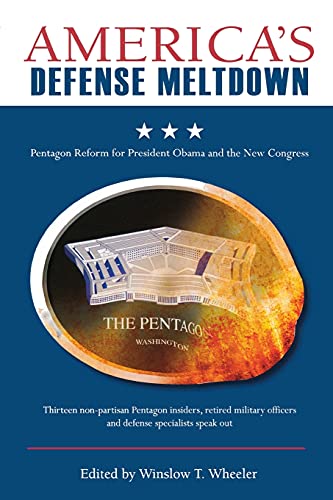 Demonstrates that the complex weapons embraced by the Pentagon and Congress as vital for national defense are barely adequate for engaging in outmoded 20th century forms of warfare.

America's Defense Meltdown: Pentagon Reform for President Obama and the New Congress describes how America's armed forces are manned and equipped to fight, at best, enemies that do not now-and may never again-exist and to combat real enemies ineffectively at high human and material cost. Given that many regard America's military as "the best in the world," how can this be?

In answer to this question, 13 "non-partisan Pentagon insiders, retired military officers, and defense specialists" lay out an array of hard-hitting and well-documented charges against our current defense establishment. They demonstrate that the hugely expensive and excessively complex weapons embraced by the Pentagon and Congress as vital for our national defense are barely adequate for engaging in outmoded 20th century forms of warfare. They are woefully inadequate for fighting a 21st century "fourth generation" war, as we've learned so painfully in Iraq and Afghanistan. At least as disturbing is the condition of the US defense budget. Over time, policy makers of all political stripes have created budgets that have made our forces smaller, less well equipped, and less ready to fight-all at dramatically increasing cost.

Fortunately, the book's authors offer "real-world" solutions to all the problems they identify. At the same time, however, they remain pessimistic about the prospects for real change-arguing that in a system that measures merit by the amount of money spent, the reform proposals elaborated in this book are likely to meet intense resistance. As Winslow Wheeler remarks, "The changes require a president with an iron will who will require real, not cosmetic, reforms of a system determined to and skilled at countering them. It will also require a president who will stick with the process for years, continuously making decisions that will ultimately reverse the present disastrous course U.S. national security is now on. "

"The talent, judgment, and insight collected in this book are phenomenal. Over the last generation, the authors have been more right, more often, about more issues of crucial importance to American security than any other group I can think of. It is a tremendous benefit to have their views collected in one place and concentrated on the next big choices facing a new Administration. This really is a book that every serious-minded citizen should read."-James Fallows, Atlantic Monthly
Winslow T. Wheeler worked on national security issues for 31 years for members of the U.S. Senate and for the U.S. General Accounting Office. He is Director of the Straus Military Reform Project at the Center for Defense Information in Washington, D.C. He has authored two books: The Wastrels of Defense (2004) and Military Reform (2007).
GOR010833593
9780804769310
0804769311
America's Defense Meltdown: Pentagon Reform for President Obama and the New Congress by Winslow T. Wheeler
Winslow T. Wheeler
Used - Very Good
Paperback
Stanford University Press
2009-03-25
272
N/A
Book picture is for illustrative purposes only, actual binding, cover or edition may vary.
This is a used book - there is no escaping the fact it has been read by someone else and it will show signs of wear and previous use. Overall we expect it to be in very good condition, but if you are not entirely satisfied please get in touch with us
Trustpilot