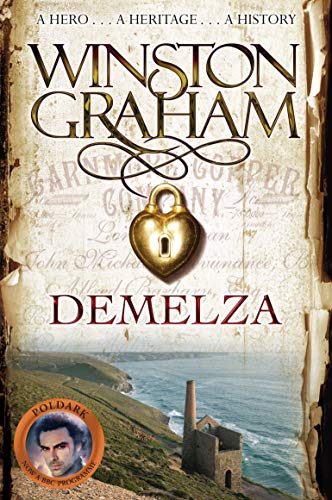 Demelza Carne, the impoverished miner's daughter Ross Poldark rescued from a fairground rabble, is now his wife. But in the events of these turbulent years test their marriage and their love.

Demelza's efforts to adapt to the ways of the gentry - and her husbane - bring her confusion and heartache, despite the joy in the birth of their first child. Ross begins a bitter struggle for the rights of the mining communities - and sows the seed of an enduring enmity with powerful George Warleggan.

Demelza is followed by Jeremy Poldark, the third title in this evocative series set in 18th century Cornwall.

'From the incomparable Winston Graham...who has everything that anyone else has, then a whole lot more' Guardian

Ross is one of literature's great heroes . . . [with] elements of Darcy, Heathcliff, Rhett Butler and Robin Hood -- Debbie Horsfield
From the incomparable Winston Graham . . . who has everything that anyone else has, then a whole lot more. * Guardian *

Winston Graham was the author of more than forty novels, including The Walking Stick, Angell, Pearl and Little God, Stephanie and Tremor. His novels have been widely translated and his famous Poldark series has been developed into two television series shown in twenty-four countries. Many of Winston Graham's books have been filmed for the big screen, the most notable being Marnie, directed by Alfred Hitchcock. Winston Graham was a Fellow of the Royal Society of Literature and in 1983 was awarded the OBE. He died in July 2003.

GOR001707435
Demelza by Winston Graham
Winston Graham
Poldark
Used - Very Good
Paperback
Pan Macmillan
2008-05-26
528
0330463330
9780330463331
N/A
Book picture is for illustrative purposes only, actual binding, cover or edition may vary.
This is a used book - there is no escaping the fact it has been read by someone else and it will show signs of wear and previous use. Overall we expect it to be in very good condition, but if you are not entirely satisfied please get in touch with us.