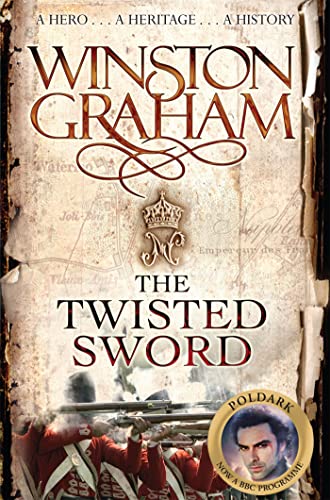 The Twisted Sword
by Winston Graham

The Twisted Sword by Winston Graham

The Twisted Sword is the eleventh novel in Winston Graham's hugely popular Poldark series, which has become a television phenomenon starring Aidan Turner.

Cornwall 1815. Demelza sees a horseman riding down the valley and senses disruption to the domestic contentment she has fought so hard to achieve. For Ross has little option but to accept the summons - and travel to Paris with his family, as an 'observer' of the French armed forces.

Parisian life begins well with an exhilarating round of balls and parties. But the return of Napoleon brings separation, distrust and danger to the Poldarks . . . and always for Demelza there is the shadow of the secret she does not even share with Ross.

The Twisted Sword is followed by the eleventh book in the Poldark series, Bella Poldark.

Ross is one of literature's great heroes . . . [with] elements of Darcy, Heathcliff, Rhett Butler and Robin Hood -- Debbie Horsfield
From the incomparable Winston Graham . . . who has everything that anyone else has, then a whole lot more. * Guardian *

Winston Graham is the author of more than forty novels, which include Cordelia, Marnie, The Walking Stick and Stephanie as well as the highly successful Poldark series. His novels have been translated into seventeen languages. Many of Winston Graham's books have been filmed for the big screen, the most notable being Marnie directed by Alfred Hitchcock. The BBC television series of the Poldark novels was broadcast in twenty-two countries and stars Aidan Turner and Eleanor Tomlinson. Winston Graham was a Fellow of the Royal Society of Literature and in 1983 was awarded the OBE. He died in July 2003.

GOR001536286
The Twisted Sword by Winston Graham
Winston Graham
Poldark
Used - Very Good
Paperback
Pan Macmillan
2008-05-26
656
033046339X
9780330463393
N/A
Book picture is for illustrative purposes only, actual binding, cover or edition may vary.
This is a used book - there is no escaping the fact it has been read by someone else and it will show signs of wear and previous use. Overall we expect it to be in very good condition, but if you are not entirely satisfied please get in touch with us.