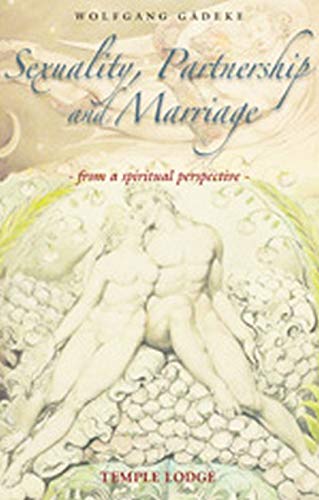 Sexuality, Partnership and Marriage: From a Spiritual Perspective by Wolfgang Gadeke

Sexuality, partnership, and marriage present us with some of the most difficult life challenges and questions of our time. With social attitudes in constant flux, some of these questions seem almost unanswerable. What is a healthy relationship? What is the role a partner--whether male or female? What is the place of sexuality in a relationship? Are marriage and monogamy still relevant in the twenty-first century?

In this invaluable collection of accessible interviews and lectures, the author deals with these and many other questions with refreshing candor. Having gained much knowledge from his many years of work as a priest, marriage counselor, and studies of Anthroposophy, Gadeke's approach is full of spiritual insight, as well as frank, practical, and down to earth.

Some of the themes discussed are overcoming blocks to communication; finding one's essential self within a marriage; the role of children in a relationship; sexuality and children; perversions; the role of counseling; relationships and monogamy; the concept of marriage and its spiritual repercussions; biological and soul differences; and, the fundamental sexual polarity of man and woman.

WOLFGANG C. GADEKE was born in Bremen in 1943. He studied Protestant and Catholic theology, and was ordained as a priest of the Christian Community in Stuttgart. He has worked as a priest, a marriage guidance counsellor, taught at the Priests' Seminary in Stuttgart, and held courses on marriage. Since 1990 he has been a director of the Christian Community in North Germany.

GOR002261032
Sexuality, Partnership and Marriage: From a Spiritual Perspective by Wolfgang Gadeke
Wolfgang Gadeke
Used - Very Good
Paperback
Temple Lodge Publishing
2012-11-19
208
0904693996
9780904693997
N/A
Book picture is for illustrative purposes only, actual binding, cover or edition may vary.
This is a used book - there is no escaping the fact it has been read by someone else and it will show signs of wear and previous use. Overall we expect it to be in very good condition, but if you are not entirely satisfied please get in touch with us.