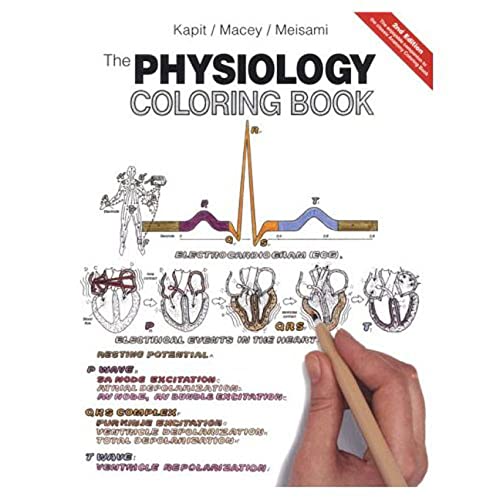 Out of Stock
$19.49
inc. GST
Presents a combination of introductory material, names and illustrations to be colored, and substantive captions to deliver a comprehensive, yet easy-to-understand, treatment of physiology. This coloring book covers topics in self-contained two-page spreads, allowing students to easily focus on the material being presented.
Like New
Only 0 left

This coloring book offers an enjoyable, highly effective way for students to learn physiology. Topics are covered in self-contained two-page spreads, allowing students to easily focus on the material being presented. A unique combination of introductory material, names and illustrations to be colored, and substantive captions deliver a comprehensive, yet easy-to-understand, treatment of physiology. The Physiology Coloring Book is the companion to the extremely successful Anatomy Coloring Book , which has sold more than 2.5 million copies.

Wynn Kapit graduated in 1955 from the University of Miami, Florida with honors in Business Administration and Law. He then attended Art Center School in Los Angeles and worked in New York as a graphic designer and advertising art director from 1960-66. He moved to California to pursue a painting career and was given a one-man show at the Legion of Honor in San Francisco in 1968. He then attended the University of California at Berkeley and received a Masters in Painting and worked as a portraitist and teacher of figure drawing.

Robert Macey is currently Professor Emeritus in the Department of Molecular and Cell Biology at the University of California, Berkeley. He was a Professor of Physiology and Chair of the Department of Physiology-Anatomy at Berkeley. Dr. Macey has written extensive research articles and reviews on membrane transport as well as a successful text on human physiology. He received his Ph.D. from the University of Chicago.

GOR008400266
The Physiology Coloring Book by Wynn Kapit
Wynn Kapit
Used - Like New
Paperback
Pearson Education (US)
1999-09-23
320
0321036638
9780321036636
N/A
Book picture is for illustrative purposes only, actual binding, cover or edition may vary.
This is a used book - there is no escaping the fact it has been read by someone else and it will show signs of wear and previous use. Overall we expect it to be in very good condition, but if you are not entirely satisfied please get in touch with us.