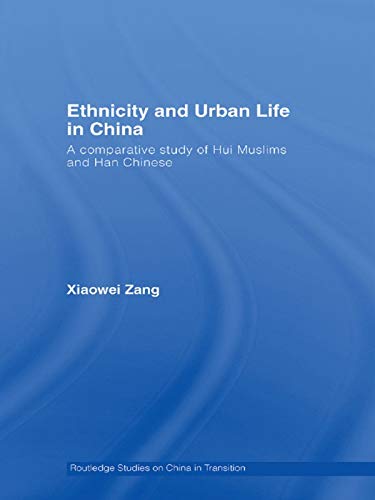 Ethnicity and Urban Life in China: A Comparative Study of Hui Muslims and Han Chinese by Xiaowei Zang (City University of Hong Kong)

This much-needed work on ethnicity in Asia offers a major sociological analysis of Hui Muslims in contemporary China. Using both qualitative and quantitative data derived from fieldwork in Lanzhou between March 2001 and July 2004, it looks at the contrast between the urban life of the Han people, the ethnic majority in the city of Lanzhou, and the Hui people, the largest ethnic minority in the city, and assesses the link between minority ethnicity and traditional behaviour in urban sociology and research on ethnic groups of China.

Contributing to the global discourse on Islam, religious fundamentalism and modernity, this book will be invaluable to anyone interested in Chinese society, Islam, religion, development, urban studies, anthropology and ethnicity.

Xiaowei Zang is Associate Professor in the Department of Asian and International Studies, City University of Hong Kong.
1. New Wine, Old Bottle 2. Neighbors United, Neighbors Divided 3. Sworn Brotherhood or Modern Friendship 4. A Lonely Crowd or a Network Society? 5. Finding a Mate in a Metropolis 6. Who Marries Whom? 7. 'Match Door' Marriages 8. Family Behavior 9. Ethnicity and Urban Life in China
NLS9780415666435
9780415666435
0415666430
Ethnicity and Urban Life in China: A Comparative Study of Hui Muslims and Han Chinese by Xiaowei Zang (City University of Hong Kong)
Xiaowei Zang (City University of Hong Kong)
New
Paperback
Taylor & Francis Ltd
2011-03-24
190
N/A
Book picture is for illustrative purposes only, actual binding, cover or edition may vary.
This is a new book - be the first to read this copy. With untouched pages and a perfect binding, your brand new copy is ready to be opened for the first time
Trustpilot