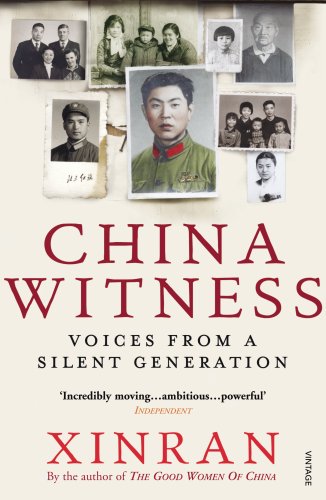 Out of Stock
$19.49
inc. GST
Includes grandparents and great-grandparents who sum up in their own words the vast changes that have overtaken China's people over a century. This book is also at once a journey by the author through time and place, and a memorial to those who have lived through war and civil war, persecution, invasion, revolution, famine, and, Westernization.
Like New
Only 0 left

China Witness: Voices from a Silent Generation by Xinran

China Witness is the personal testimony of a generation whose stories have not yet been told. Here the grandparents and great-grandparents of today sum up in their own words - for the first and perhaps the last time - the vast changes that have overtaken China's people over a century. The book is at once a journey by the author through time and place, and a memorial to those who have lived through war and civil war, persecution, invasion, revolution, famine, modernization, Westernization - and have survived into the 21st century. We meet everyday heroes, now in their seventies, eighties and nineties, from across this vast country - a herb woman at a market, retired teachers, a legendary 'double-gun woman', Red Guards, oil pioneers, an acrobat, a female general, a lantern maker, taxi drivers, and more- those whose voices, as Xinran says, 'will help our future understand our past'.

"Right here we see the red lines that many Chinese still draw for themselves in public discourse, or even privately, the boundaries they dare not cross even today. No other style of storytelling could have exhibited them with more clarity or greater rawness" * The Times *
"An incredibly moving and ambitious collection... There is a great deal of light in this powerful book" * Independent *
"Another excellent book...ambitious" * Literary Review *
"These stories are often heart-rending, but are recounted in a very self-effacing way by the subjects themselves... [The book] is deeply engaging and focuses almost exclusively on issues and experiences rarely discussed in China or elsewhere. It takes people to places they would not otherwise have been able to go: into the minds of previously silent witnesses... a stunning insight into its [China's] people" * Herald *
"If you loved Jung Chang's Wild Swans you'll love this book" * Image magazine *

Xinran was born in Beijing in 1958 and was a successful journalist and radio presenter in China. In 1997 she moved to London, where she began work on her seminal book about Chinese women's lives, The Good Women of China. Since then she has written a regular column for the Guardian; appeared frequently on radio and TV and has published the acclaimed Sky Burial; the novel Miss Chopsticks; the groundbreaking book of oral history China Witness; a book of her Guardian columns called What the Chinese Don't Eat and Message from an Unknown Chinese Mother, about mothers and their lost daughters. She lives in London but travels regularly to China.

GOR009683300
China Witness: Voices from a Silent Generation by Xinran
Xinran
Used - Like New
Paperback
Vintage Publishing
2009-05-07
464
0099501481
9780099501480
N/A
Book picture is for illustrative purposes only, actual binding, cover or edition may vary.
This is a used book - there is no escaping the fact it has been read by someone else and it will show signs of wear and previous use. Overall we expect it to be in very good condition, but if you are not entirely satisfied please get in touch with us.