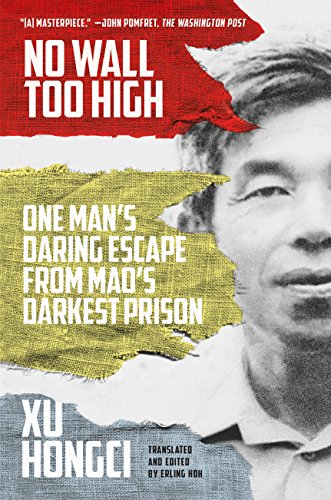 No Wall Too High
by Xu Hongci

No Wall Too High Summary

No Wall Too High: One Man's Daring Escape from Mao's Darkest Prison by Xu Hongci

Mao Zedong's labour reform camps were notoriously brutal: modeled after the Soviet gulag, their inmates were subject to backbreaking labour, malnutrition, and vindictive wardens. They were thought to be impossible to escape but one man did. Xu Hongci, a young medical student, was a loyal member of the Communist Party until he fell victim to Mao's Anti-Rightist Campaign in 1957. After posting a criticism of the party, he spent the next fourteen years in the labor camps. Despite horrific conditions and terrible odds, Hongci was determined to escape, failing three times before he succeeded in 1972. Hongci broke out of a prison near the Burmese border, traveled across China to see his mother in Shanghai one last time, and then finally crossed the Mongolian border. There he eventually married and settled into a new life, until he was able to return home after Mao's death. Originally published in Hong Kong, Hongci's remarkable memoir recounts his life from childhood through his prison break. After discovering the book in a Hong Kong library, the journalist Erling Hoh tracked down the original manuscript and compiled this abridged translation of Hongci's memoir, which includes background on this turbulent period, an epilogue following Hongci up to his death in 2008, and Hongci's own drawings and maps. Almost nobody was able to escape from Mao's labor camps, but No Wall Too High tells the true story of someone who did.

No Wall Too High Reviews

"One of the best ways to gain an understanding of the type of society the Communists created in China--and its legacy today--is through the memoirs of people who survived these campaigns. Jung Chang's Wild Swans remains a classic. But there are other equally moving books, such as Prisoner of Mao by Bao Ruowang, A Single Tear by Wu Ningkun and Li Yikai, and Life and Death in Shanghai by Nien Cheng . . . Now we can add another masterpiece to this list: No Wall Too High: One Man's Daring Escape From Mao's Darkest Prison by Xu Hongci." --John Pomfret, The Washington Post

"One of the most compelling and moving memoirs to emerge from Communist China . . . now appearing in English for the first time. The actual escape, which took Xu [Hongci] on a clandestine journey of many thousands of miles, is absolutely heart-stopping, material for a Hollywood thriller. But Xu's book is more than that. It is the story of a deeply personal, intimate, crushing encounter with history, specifically the tumultuous Chinese history of the second half of the 20th century. It is also a story of remarkable human endurance, of a refusal to be crushed, of the will to be free . . . This English version has been deftly edited and translated by Erling Hoh, a Chinese writer living in Sweden, who has provided helpful notes explaining the historical context for each stage of Xu's life." --Richard Bernstein, The Los Angeles Times

"There are many memoirs by Chinese imprisoned during the Cultural Revolution, but I've never read one, by a loyal party member, like this. . . Erling Hoh['s] . . . translation makes this ghastly story riveting." --Jonathan Mirsky, Literary Review

"Xu Hongci is China's Louis Zamperini, an ordinary man who simply refused to be broken. To understand the deepest source of China's rise, read Xu Hongci's astonishing epic, a tale of ingenuity, bravery, and, most important, unshakable determination. His chronicle, masterfully translated by Erling Hoh, is the story of modern China itself: the struggle for freedom of body and mind." --Evan Osnos, National Book Award-winning author of Age of Ambition

"[No Wall Too High] deserves to become a classic, like Jung Chang's Wild Swans, not only for Xu Hongci's survival against the odds, but for confronting us unsparingly with what happens when folly and intolerance meet unfettered political power." --Rebecca McQuillan, The National

"No Wall Too High is an inspiring story of the strength of the human spirit in the face of greed and cruelty." --Cameron Dueck, South China Morning Post

"No Wall Too High . . . takes the reader on a turbulent and fraught journey of capture, escape, evasion, survival and love. Translated with immense skill and talent, it's a thrilling read . . . It's a story of strength, desperation, growth and hope--and it inspires as much as it horrifies. The effectiveness is in part due to the use of language--Erling Hoh is no mere translator, but someone who has crafted Xu Hongci's words into moments and phrases that stick with the reader--allowing Xu Hongci's voice to come through in an immensely relatable way, reaching out to the reader and imploring them to listen to this hugely important tale." --The Book Bag

"One of the greatest escape stories I've ever read. Xu Hongci died in 2008 at the age of 75, but his story, now translated into English for the first time by journalist Erling Hoh, will live on as a timeless testament to the resilience of the human spirit." --Simon Griffith, The Mail on Sunday

"Xu's extraordinary tale of endurance . . . is a rarity. . . As gripping as any World War II prisoner-of-war epic . . .[An] extraordinary and powerful memoir." --Tony Rennell, Daily Mail

"Xu's account of his escape through the desert into Mongolia is thrilling, yet this is ultimately less an adventure story than an act of historical witness, offering a rare and unflinching first-hand description of the cruelty of the Chinese gulag." --Booklist

"An often harrowing, valuable account for students of daily life in the early years of the period culminating in China's little-documented civil war of the 1970s." --Kirkus Review

"Swedish-based journalist Hoh discovered Xu's memoir in a Hong Kong library and tracked down the original manuscript, compiling this abridged translation and providing crucial background material. It should be a movie." --Library Journal

"I picked up Xu Hongci's memoir thinking that I would read it for an hour or so a night, spread out over several days. But the book was so absorbing that I never voluntarily put it down. It is a fascinating story, simply and movingly told. This is the story of the blackest days of Mao's rule, when the party chairman set out, unfortunately all too successfully, to turn the Chinese people viciously against one another. The question of how ordinary people could be so cruel is one that is recurring with a vengeance in the world of today, and still defies explanation. Xu Hongci's story must be told so we are not allowed to forget." --Anne Thurston, coauthor of The Private Life of Chairman Mao and The Noodle Maker of Kalimpong

"An extraordinary story by a Chinese Count of Monte Cristo who managed to escape from a Maoist labor camp after a fourteen-year imprisonment; a fascinating first-person account by a survivor of the Chinese gulag. This enthralling book celebrates the triumph of human dignity over the inhuman nature of a totalitarian state. If you want to understand the essence of Maoism, read this captivating narrative filled with hair-raising details about one man's life in Mao's China." --Alexander V. Pantsov, primary author of Mao: The Real Story and Deng Xiaoping: A Revolutionary Life

"An important book: the gripping and deeply moving account of a man's lifelong struggle to reach freedom, driven by an indomitable will to survive in Mao's China." --Xiaolu Guo, author of Once Upon a Time in the East

"I am struck by the freshness of Xu Hongci's whole story. We have plenty of reminiscences by intellectuals and party officials in China, but it is rare to find memoirs of ordinary people. And most tend to focus on the Cultural Revolution, whereas Xu Hongci starts his account with the Second World War, giving the reader a much better sense of how the entire Maoist era evolved over time. While most memoirs tell us how the victims are eventually crushed by an unforgiving system, one of the most striking aspects of Xu's account is his determination to gain freedom. Xu escapes again and again, his moral integrity seemingly unbroken. The manuscript has been translated very elegantly by Erling Hoh, producing a text that may flow even better than the original." --Frank Dikotter, author of The Cultural Revolution: A People's History, 1962-1976 and Mao's Great Famine: The History of China's Most Devastating Catastrophe, 1958-1962

"Not only is this book the riveting account of a single man detailing his repeated attempts to break free, and finally to achieve success in doing so, it also stands as eloquent testimony, indeed a searing indictment, against the tyranny of totalitarian control of a whole nation by the Chinese Communist Party. This volume fills a large gap in available descriptions of the history of Communist China. We can be grateful to Xu Hongci for having written it, to all those who helped him publish the Chinese version, and to Erling Hoh for the extraordinary commitment, nay duty, to translate this lengthy work into English." --Victor H. Mair, Professor of Chinese Language and Literature, University of Pennsylvania

Xu Hongci (1933-2008), a writer from Shanghai, was branded a Rightist in 1957 and spent fourteen years in Mao Zedong's labor reform camps. Following his escape, he lived first in Tsetserleg, Mongolia, and then in Shanghai with his wife, Sukh Oyunbileg, and their children until his death in 2008.

Erling Hoh is a writer and translator of Swedish and Chinese descent and is based in northern Sweden. A former correspondent for Archaeology and the Danish newspaper Dagbladet Information, he has written about Chinese history, culture, and politics for numerous magazines, including Natural History and the Far Eastern Economic Review. He coauthored The True History of Tea with Professor Victor Mair, which was critically acclaimed by The Guardian for combining "a real depth of knowledge with a deft stylistic and organizational touch."

GOR009736780
No Wall Too High: One Man's Daring Escape from Mao's Darkest Prison by Xu Hongci
Xu Hongci
Used - Very Good
Paperback
Sarah Crichton Books
2018-02-09
336
0374537542
9780374537548
N/A
Book picture is for illustrative purposes only, actual binding, cover or edition may vary.
This is a used book - there is no escaping the fact it has been read by someone else and it will show signs of wear and previous use. Overall we expect it to be in very good condition, but if you are not entirely satisfied please get in touch with us.