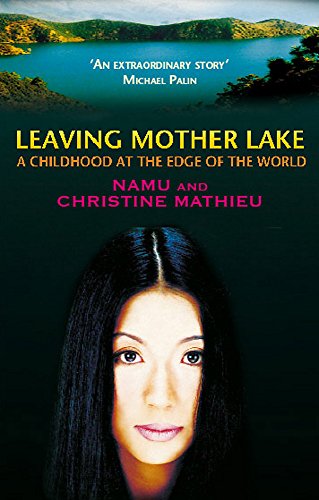 * The spirited tale of a young Chinese girl's transformation into 'The Tibetan Madonna'.
* A universal tale of mothers and daughters - the battles that drive them apart and the love that brings them back together.

Leaving Mother Lake: A Girlhood at the edge of the World by Yang Erche Namu

The Tibetans refer to Moso country as 'The Country of Daughters' because of their unique matrilineal society. In Moso culture, daughters are favoured children. There is no word for father, marriage is considered a backward practice, and property is passed on from mother to daughter. LEAVING MOTHER LAKE is the haunting memoir of a girl growing up in a remarkable place. In her village, Namu was known as the girl whose mother tried to give her away three times because she would not stop crying. The strong-willed Namu clashes with her equally fierce mother, becoming alienated from village life. When Chinese officials come looking for talented singers, she seizes her chance and breaks the taboo that holds Moso culture together - she leaves her mother's house. Winning a place at the Shanghai Conservatory of Music as a special minority student, Namu becomes 'the Madonna of Tibet', singing on the soundtrack of The Joy Luck Club.

What raises LEAVING MOTHER LAKE above the general run of travel books is Namu's personality. She is lively, wise and sparky, and breathes real life into an extraordinary story * Michael Palin *
Rich in local colour and lore, an evocative introduction to a unique way of life * KIRKUS *
A lyrical evocation of girlhood in a remote land... [a] phenomenal true story. * AXM *

Namu divides her time between Beijing, Geneva, and San Francisco.
Christine Mathieu is an anthropologist and short story writer.

GOR001194077
Leaving Mother Lake: A Girlhood at the edge of the World by Yang Erche Namu
Yang Erche Namu
Used - Very Good
Paperback
Little, Brown Book Group
2004-03-12
304
0349117586
9780349117584
N/A
Book picture is for illustrative purposes only, actual binding, cover or edition may vary.
This is a used book - there is no escaping the fact it has been read by someone else and it will show signs of wear and previous use. Overall we expect it to be in very good condition, but if you are not entirely satisfied please get in touch with us.