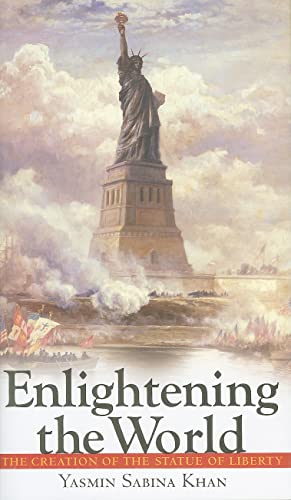 Conceived in the aftermath of the American Civil War and the grief that swept France over the assassination of Abraham Lincoln, the Statue of Liberty has been a potent symbol of the nation's highest ideals since it was unveiled in 1886. Dramatically...

Enlightening the World: The Creation of the Statue of Liberty by Yasmin Sabina Khan

Conceived in the aftermath of the American Civil War and the grief that swept France over the assassination of Abraham Lincoln, the Statue of Liberty has been a potent symbol of the nation's highest ideals since it was unveiled in 1886. Dramatically situated on Bedloe's Island (now Liberty Island) in the harbor of New York City, the statue has served as a reminder for generations of immigrants of America's long tradition as an asylum for the poor and the persecuted. Although it is among the most famous sculptures in the world, the story of its creation is little known.

In Enlightening the World, Yasmin Sabina Khan provides a fascinating new account of the design of the statue and the lives of the people who created it, along with the tumultuous events in France and the United States that influenced them. Khan's narrative begins on the battlefields of Gettysburg, where Lincoln framed the Civil War as a conflict testing whether a nation "conceived in liberty, and dedicated to the proposition that all men are created equal... can long endure." People around the world agreed with Lincoln that this question-and the fate of the Union itself-affected the "whole family of man." Inspired by the Union's victory and stunned by Lincoln's death, Edouard-Rene Lefebvre de Laboulaye, a legal scholar and noted proponent of friendship between his native France and the United States, conceived of a monument to liberty and the exemplary form of government established by the young nation. For Laboulaye and all of France, the statue would be called La Liberte Eclairant le Monde-Liberty Enlightening the World.

Following the statue's twenty-year journey from concept to construction, Khan reveals in brilliant detail the intersecting lives that led to the realization of Laboulaye's dream: the Marquis de Lafayette; Alexis de Tocqueville; the sculptor Auguste Bartholdi, whose commitment to liberty and self-government was heightened by his experience of the Franco-Prussian War; the architect Richard Morris Hunt, the first American to study architecture at the prestigious Ecole des Beaux-Arts in Paris; and the engineer Gustave Eiffel, who pushed the limits for large-scale metal construction. Also here are the contributions of such figures as Senators Charles Sumner and Carl Schurz, the artist John La Farge, the poet Emma Lazarus, and the publisher Joseph Pulitzer.

While exploring the creation of the statue, Khan points to possible sources-several previously unexamined-for the design. She links the statue's crown of rays with Benjamin Franklin's image of the rising sun and makes a clear connection between the broken chain under Lady Liberty's foot and the abolition of slavery. Through the rich story of this remarkable national monument, Enlightening the World celebrates both a work of human accomplishment and the vitality of liberty.

"Based on research in U.S. and French archives, this vigorously written book focuses on the conception, design, construction, and installation of one of America's iconic symbols. Khan, an engineer herself, presents a linear account of the effort from 1865 to 1886 to memorialize French participation in the American Revolution, grief at President Lincoln's assassination, France's transition to democracy, and the universal cause of freedom. She supplements her narrative with frequent discussions of the meaning of liberty, the importance of classical design in 19th-century America, and the Franco-American connection from Lafayette to the Third Republic.... Rather than analyzing the later meanings of the statue, Khan's annotated book tells of its imaging and building in the context of its time. Her definitions of architectural and engineering methods will please the lay reader."

"Despite countless publications on New York Harbor's Statue of Liberty, no previous study has detailed its complex history. Yasmin Sabina Khan ably fills this gap with a lucid account connecting France's widespread grief over Abraham Lincoln's 1865 assassination with that country's own struggles to establish a lasting democracy. An important book for general audiences."

"Yasmin Sabina Khan's book provides a fresh perspective on the twenty-one year struggle to bring the idea for such a monument to fruition. Following a loosely chronological order, Khan charts the monument's journey from conception in 1865 to unveiling in 1886 by exploring the lives and political ideals of those who designed and built the statue. Woven into these personal stories is a broader account of the political situation both in France and the United States during the period in question."

"Two decades ago, disturbing results of a survey indicated that French high-school students knew more than their American counterparts about the Statue of Liberty. This excellent account of the conception, design, and construction of The Lady can remedy that imbalance. Khan... begins by describing the political and cultural context in both the United States and France following the Civil War.... It is useful to be reminded that America was viewed as a beacon of progress and liberty to many French people a century ago. The concept of a monument to that liberty was promoted by a legal scholar, Edouard-Rene Lefebvre de Laboulaye, and Khan eloquently describes how the concept turned into reality over a span of twenty years. Along the way, she provides many fascinating vignettes and portraits of several of the key political and artistic personalities who contributed to the project. This is a beautifully written tribute to a great monument and to those who made its creation possible."

"While countless books have examined the imposing iron frame and copper skin monument that towers high on its pedestal... none of the previous publications provide the scope that makes Khan's work original and illuminating.... Complementing Marvin Trachtenberg's important book The Statue of Liberty (1976), Khan's comprehensive study will be of interest to both scholars and a general audience."

GOR006752482
Enlightening the World: The Creation of the Statue of Liberty by Yasmin Sabina Khan
Yasmin Sabina Khan
Used - Very Good
Hardback
Cornell University Press
2010-02-11
240
0801448514
9780801448515
N/A
Book picture is for illustrative purposes only, actual binding, cover or edition may vary.
This is a used book - there is no escaping the fact it has been read by someone else and it will show signs of wear and previous use. Overall we expect it to be in very good condition, but if you are not entirely satisfied please get in touch with us.