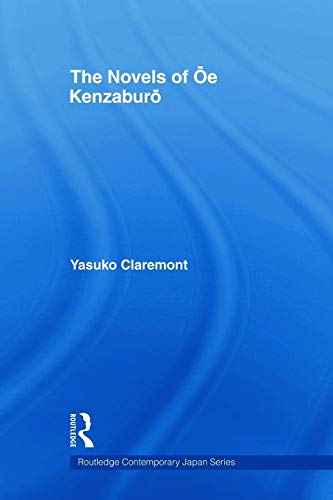 The Novels of Oe Kenzaburo
by Yasuko Claremont

The Novels of Oe Kenzaburo Summary

The Novels of Oe Kenzaburo by Yasuko Claremont

Oe Kenzaburo was awarded the Nobel Prize for Literature in 1994. This critical study examines Oe's entire career from 1957 - 2006 and includes chapters on Oe's later novels not published in English. Through close readings at different points in Oe's career Yasuko Claremont establishes the spiritual path that he has taken in its three major phrases of nihilism, atonement, and salvation, all highlighted against a background of violence and suicidal despair that saturate his pages. Oe uses myth in two distinct ways: to link mankind to the archetypal past, and as a critique of contemporary society. Equally, he depicts the great themes of redemption and salvation on two levels: that of the individual atoning for a particular act, and on a universal level of self-abnegation, dying for others. In the end it is Oe's ethical concerns that win out, as he turns to the children, the inheritors of the future, `new men in a new age' who will have the power and desire to redress the ills besetting the world today. Essentially, Oe is a moralist, a novelist of ideas whose fiction is densely packed with references from Western thought and poetry.

This book is an important read for scholars of Oe Kenzaburo's work and those studying Japanese Literature and culture more generally.

The Novels of Oe Kenzaburo Reviews

"This review of his works and thoughts is undoubtedly the best primer now available for those wanting an in-depth and comprehensive understanding of a thinker and writer who has always had something of weight to say about today's Japan." - IAN McARTHUR, The University of Sydney, JOSA Vol. 41 (2009)

Yasuko Claremont is a Senior Lecturer in modern Japanese literature at the University of Sydney, Australia.

GOR010227045
The Novels of Oe Kenzaburo by Yasuko Claremont
Yasuko Claremont
Routledge Contemporary Japan Series
Used - Very Good
Paperback
Taylor & Francis Ltd
2011-04-11
224
0415666759
9780415666756
N/A
Book picture is for illustrative purposes only, actual binding, cover or edition may vary.
This is a used book - there is no escaping the fact it has been read by someone else and it will show signs of wear and previous use. Overall we expect it to be in very good condition, but if you are not entirely satisfied please get in touch with us.