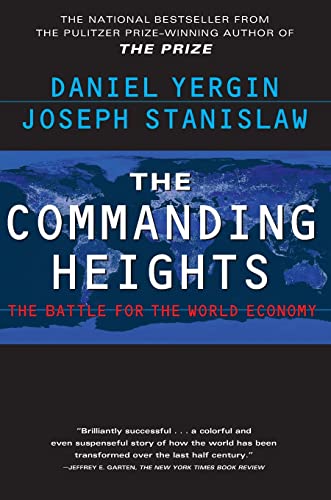 The Commanding Heights: The Battle for the World Economy
by Yergin

The Commanding Heights: The Battle for the World Economy Summary

The Commanding Heights: The Battle for the World Economy by Yergin

The most powerful force in the world economy today is the redefinition of the relationship between state and marketplace - a process that goes by the name of privatization though this term is inadequate to express its far-reaching changes. We are moving from an era in which governments sought to seize and control the 'commanding heights' of the economy to an era in which the idea of free markets is capturing the commanding heights of world economic thinking. Basic views of how society ought to be organized are undergoing rapid change, trillions of dollars are changing hands and so is fundamental political power. Great new wealth is being created - as are huge opportunities and huge risks. Taking a worldwide perspective, including Britain, where the process began with Mrs Thatcher, Europe and the former USSR, China, Latin America and the US, THE COMMANDING HEIGHTS shows how a revolution in ideas is transforming the world economy - why it is happening, how it can go wrong and what it will mean for the global economy in the twenty-first century.

The Commanding Heights: The Battle for the World Economy Reviews

Gary Becker Winner of the Nobel Prize for Economics, 1992 An absorbing, well-written narrative of the victory of market forces over communism and socialism. The authors effectively and dramatically show how ideas and events combined to produce the most important economic revolution of the second half of this century.
Yegor Gaidar Former Deputy Prime Minister and Minister of Finance, Russia "The Commanding Heights" captures the modern world's most crucial changes in a dramatic and vivid way. This book will be invaluable for readers in every part of the world -- decision makers and general readers alike -- for its ideas will be instrumental in helping the global community prepare for the twenty-first century.
Professor Rosabeth Moss Kanter Harvard Business School, Author of "World Class: Thriving Locally in the Global Economy""The Commanding Heights" persuasively and powerfully identifies today's and tomorrow's critical challenges for government policy and corporate action. Whether enthralled by the prospects of ever-expanding free markets or anxious about the social fallout of market excesses, readers will benefit from the book's compelling economic histories of key world regions showing how they are coping with change on the cusp of a new century.
Adam Smith Author of "Paper Money" With great clarity and intelligence, the authors have written one of the central stories of our time. We have a torrent of information -- discordant, cacophonous, dissonant -- from TV, PCs, and print. The great accomplishment of "The Commanding Heights" is to make sense of this confusing scene.
John Browne Chief Executive, BP (British Petroleum) "The Commanding Heights" conveys the new reality of the world economy with a sure grasp and a unique vision. It is stimulating, topical, and very well written. The depth of the analysis and the geographic breadth are overwhelming. It is a resounding achievement -- and essential reading for anyone engaged in international business.
George P. Shultz Former U.S. Secretary of State and Former U.S. Secretary of the Treasury A stunning and eminently readable account of how the market has captured the commanding heights of economic thinking. Transforming economic analysis into a compelling narrative, the authors give us a comprehensive picture of an unfolding and dramatic story. It is as engrossing as it is instructive.
Lawrence Summers There has been a revolution in economic thought every bit as profound in its implications as any other scientific revolution. "The Commanding Heights" tells the story of changes that have been world-transforming. It's a compelling guide to the 21st century economy.
Valery Giscard D'Estaing Former President of France The crowning achievement of "The Commanding Heights" is that it illuminates today's profound changes through the great sweep of history.

Daniel Yergin is a writer of international renown and president of Cambridge Energy Research Associates, a leading firm on political risk and economic analysis. He is consulted by ministers, politicians, CEOs and investors around the world. Joseph Stanislaw is a leading international economic advisor and commentator on markets and politics. He is MD of Cambridge Energy and Research Associates, head of Global Research and Director of its European office in Paris.

GOR003272582
The Commanding Heights: The Battle for the World Economy by Yergin
Yergin
Used - Very Good
Paperback
Simon & Schuster
2002-04-29
496
068483569X
9780684835693
N/A
Book picture is for illustrative purposes only, actual binding, cover or edition may vary.
The book has been read but remains in clean condition. All pages are intact and the cover is intact. Some minor wear to the spine.