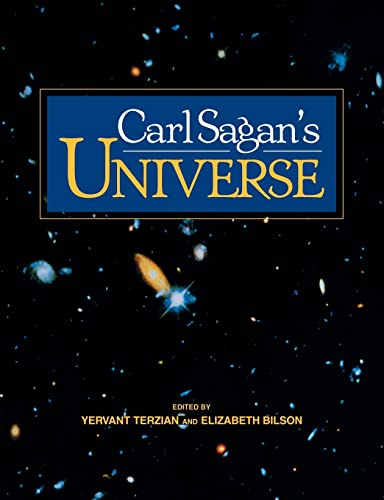 Used Price
$38.99
inc. GST
Free Shipping in Australia
Carl Sagan's many contributions to science and society have been profound and far-reaching, influencing millions of people around the world. This is a fascinating and beautifully illustrated collection of articles by a distinguished team of authors and covers the many fields in which he worked.
Very Good

Carl Sagan's many contributions to science and society have been profound and far-reaching, influencing millions of people around the world. He carried out significant research in planetary science, was closely associated with the US space program, created the highly acclaimed television series Cosmos, and was the Pulitzer Prize-winning author of many best-selling popular science books. Carl Sagan's Universe is a fascinating and beautifully illustrated collection of articles by a distinguished team of authors, and covers the many fields of science, education, policy making, and related areas in which Sagan worked. The book is divided into four sections, the first two of which provide an absorbing overview of the US space program (as well as a complementary account of the Russian program), and of the history and current status of the search for extraterrestrial life. The final two sections deal with the importance of science education in the successful development of a technological society, and of the shaping of science policy in tackling the problems facing us today. Also included is a separate chapter by Sagan himself, discussing the place and role of our planet and mankind in the universe. Written in honour of Carl Sagan's many achievements, this book will fascinate and reward anyone interested in planetary science and exploration, the search for extraterrestrial life, or the role of science in the modern world.

'This beautifully illustrated book (20 colour plates, many more in black and white) is a fitting tribute by more than 20 of his friends and colleagues to the best-known astronomer of our time ... it is also exhilarating, because it records a vertitable explosion in our knowledge of the universe - an explosion in which Sagan often acted as a fuse ... All the essays are by leading authorities in the field, yet all are accessible to the non-specialist reader. They are full of fascinating and little-known items of information ... Carl Sagan's Universe covers such a vast range of topics ... that I cannot imagine any intelligent reader failing to derive both information and entertainment from it.' Arthur C. Clarke, The Times Higher Education Supplement
' ... presentations delivered at a Cornell University symposium, in October 1994, in honour of Sagan's 60th birthday. It is instructive not only in the subjects covered but in the reverence held for Sagan by the presenters: authors, theologians and sociologists.' Mark Freistedt, American Statesman
'... admirably clear and approachable.' New Scientist
'Respect and admiration Carl Sagan commanded amongst colleagues and friends ... Articles include one by Carl Sagan himself ... The book is illustrated with 20 colour plates and many photographs. I found this book absorbing and enlightening and a very fitting tribute to Carl Sagan.' Eric Partridge, Astronomy Now
'Carl Sagan's Universe is a remarkable melange of thoughts, commentaries, and expositions woven into a set of themes that includes planetary exploration, life in the cosmos, science education, and science, environment and public policy.' Sky and Telescope
'... a worthy memorial to a brilliant and humane scientist of our century.' V. V. Raman, Choice
' ... a very fine piece of work that will interest a wide range of readers'. Nature
'... I would recommend it to all those who share, or who would like to share, Carl Sagan's optimistic vision of the contribution science can make to a hopeful future for humanity.' Ian Crawford, The Observatory
' ... a highly recommended, fascinating, informative and in places provocative read.' Edward Hanna, The Journal of the British Astronomical Association
'... teeming with thoughts and ideas.' The CT
'We have great need for more scientists with Carl Sagan's gift of communication. This is a fitting tribute.' Tony Sheehan, The Open University Geological Society

GOR001740229
Carl Sagan's Universe by Yervant Terzian
Yervant Terzian
Used - Very Good
Paperback
Cambridge University Press
1997-08-13
312
0521576032
9780521576031
N/A
Book picture is for illustrative purposes only, actual binding, cover or edition may vary.
This is a used book - there is no escaping the fact it has been read by someone else and it will show signs of wear and previous use. Overall we expect it to be in very good condition, but if you are not entirely satisfied please get in touch with us.