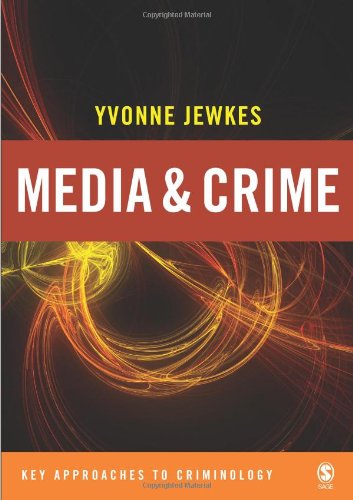 Media and Crime
by Yvonne Jewkes

Used Price
$39.99
inc. GST
Free Shipping in Australia
Pointing a critical spotlight on media constructions of crime, this text aims to develop our understanding of the relationship between crime and the media, as well as taking existing knowledge in new directions.
Reviews:
Trustpilot
Very Good

Media and Crime by Yvonne Jewkes

'Media and Crime is a thought-provoking and scholarly work written in a very lively style. It will be of interest to readers of SCHOLAG whether or not they have some knowledge of criminological theories.'

`Criminologists and a bewildering array of other voices have commented on the relationship between media and crime on many occasions over many decades. Those of us who have worked and taught in this area have often sensed the lack of an authoritative, systematic and up to date text to which one could refer with confidence. Yvonne Jewkes has now given us that book and we are in her debt. Jewkes is one of the few who knows the fields of both media studies and criminology equally well. She writes with confidence, clarity, insight and style. Media and Crime does not just cover the debate, it moves it forward. This is a striking and admirable achievement. This book will be widely read and widely welcomed by students and by Jewkes's academic peers' - Professor Richard Sparks, University of Edinburgh

`The book reviews key media and criminological debates against contemporary developments in the media and twenty-first century concerns about crime. More than that Media and Crime is intellectually provocative, lucid, astute and simply a good read' - Dr Maggie Wykes, University of Sheffield

`A thought-provoking critical analysis of how the mass media construct the issue of crime in the public realm. Clearly written and based on a wide-ranging review of research on crime and media it will be an invaluable source for students' - Professor Robert Reiner, London School of Economics and Politcal Science

`This book offers a vibrant and lucid guide to the constructions of crime in media culture, and the complex interactions between consumers and producers. Comprehensive and authoritatively written, Media and Crime should appear on all essential reading lists for students of criminology and media culture' - Paul Mason, Southampton Institute

* Why do only certain criminal events become thrust into the public sphere with sufficient vigour to shape public fears of victimization?

* Why are some crimes sustained by sufficiently intense public outcry to become part of our cultural fabric, while other, almost identical incidents, fail to capture the collective imagination?

* Why do some very serious crimes cast a much longer shadow than others, and some offenders take on an iconic evilness while others fade into quiet obscurity?

This book points a critical spotlight on media constructions of crime and social control, developing our understanding of the relationship between media and crime, and taking existing knowledge in new directions.

Media and Crime is an accessible text with a strong pedagogic purpose, making it an ideal introduction to the study of crime and the mass media for undergraduate and postgraduate students. The author interrogates the most important literature in the field as well as moving the debates forward with new ideas and values.

Substantive topics of current interest are covered, including:

* media constructions of children and women as victims and offenders

* the relationship between the media and the police

Chapter overviews, key terms, study questions and suggestions for further reading map the key issues in this vital and topical area of debate. The book is essential reading for students in a wide range of academic fields including criminology, media studies, sociology, gender studies and psychology.

"Jewke's book is thus a triangulated study, which contributes to a usefully interdisciplinary attempt to think through the relationship between media and crime. While it is written as a textbook, the rich and varied theoretical substance of, and case studies in, the book is suitable for research review purposes. Media and Crime: A Critical Introduction is a useful introductory text, which contains useful features for class discussion (e.g., study questions, summary, keyword definition)."

Yvonne Jewkes is Professor of Criminology at the University of Bath and Honorary Visiting Professor at the University of Melbourne. She has been carrying out prison research-much of it ethnography-for over 20 years and has spent the last decade researching and writing about prison architecture and design and their potential to rehabilitate. She has recently held two Economic and Social Research Council grants to study these topics and has worked as a consultant to prison architects and senior prison service personnel around the world. She has published extensively on various aspects of prisons and imprisonment, including (with Ben Crewe and Jamie Bennett) The Handbook on Prisons (2nd ed., 2016, Routledge). With Ben Crewe and Thomas Ugelvik, she is the Founding Editor of the new SAGE journal Incarceration.

GOR001681784
Media and Crime by Yvonne Jewkes
Yvonne Jewkes
Key Approaches to Criminology
Used - Very Good
Paperback
SAGE Publications Inc
2004-06-24
256
0761947655
9780761947653
N/A
Book picture is for illustrative purposes only, actual binding, cover or edition may vary.
This is a used book - there is no escaping the fact it has been read by someone else and it will show signs of wear and previous use. Overall we expect it to be in very good condition, but if you are not entirely satisfied please get in touch with us.