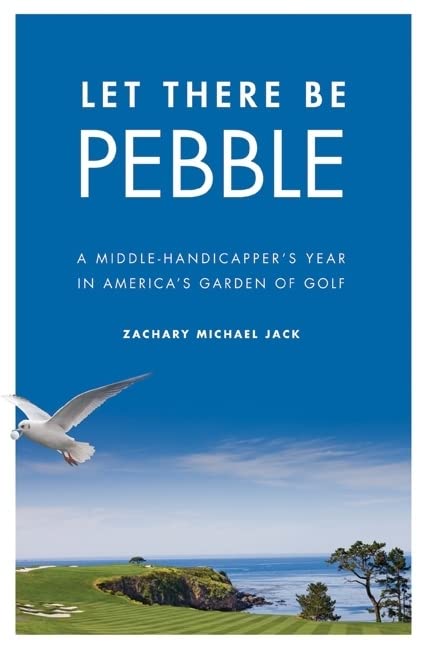 Let There Be Pebble
by Zachary Michael Jack

Used Price
$51.99
inc. GST
Free Shipping in Australia
A one-time failed Division One golf walk-on, Zachary Michael Jack opts to stare down an early midlife crisis by chronicling a US Open year spent at Pebble Beach, site of the US's number one public course and its fairy-tale host town, Carmel-by-the-Sea, California. There, along the blue Pacific, he traces the colorful, capricious, and comical world of golf on the Monterey Peninsula.
Reviews:
Trustpilot
Very Good

Let There Be Pebble Summary

Let There Be Pebble: A Middle-Handicapper's Year in America's Garden of Golf by Zachary Michael Jack

It was "scary," Jack Nicklaus said of Pebble Beach, and gave him nightmares so acute he famously woke his wife on the eve of his 1972 U.S. Open victory totally spooked. "It's not a golf course," sportswriter Jim Murray wrote, "it's a hellship." Golf writer Dan Jenkins once joked that the famed venue of the Bing Crosby National Pro-Am should be dubbed "Double Bogey-by-the-Sea."
A one-time failed Division One golf walk-on, Zachary Michael Jack opts to stare down an early midlife crisis by chronicling a U.S. Open year spent at Pebble Beach, object of his ailing father's fantasies and site of the nation's number one public course and its fairy-tale host town, Carmel-by-the-Sea, California. There, along the blue Pacific, he traces the colorful, capricious, and comical world of golf on the Monterey Peninsula as never before via interviews with legends of the game Johnny Miller, Gary Player, and Tom Watson; with today's brightest stars-Padraig Harrington, Phil Mickelson, and Bubba Watson; and with some of its most famous celebrity linksters-actor Bill Murray, Olympic soccer star Brandi Chastain, and billionaire entrepreneur Charles Schwab.
Conducting more than one hundred interviews, Jack ranges far and wide to get the scoop, talking golfing haunts with bestselling golf novelist Michael Murphy; teeing up with members of a Carmel-based worldwide golfing society devoted to mystical play; learning to play Pebble at the knee of one of the Top 50 Golf Teachers in America and with a Carmel-based journeyman pro described as "a golf savant"; and raising a cup with a lifelong Pebble Beach resident and caddy who, unbeknownst to the hackers he shepherds, is a Hall of Fame golfer. By turns hilarious, haunting, and historic, Let There Be Pebble reveals the utter uniqueness-the people, the rich history, the unforgettable setting and sporting culture-of this one-of-a-kind golfing cathedral.

Customer Reviews - Let There Be Pebble

Let There Be Pebble Reviews

"A real-life golf fantasy year, boldly lived and exuberantly told."-Kirkus * Kirkus *
"Like the author himself, the reader of Let There Be Pebble won't play golf one bit better at the end of the book. But there are enough laughs, and even a few poignant moments in between, to satisfy any golfer."-Jack Shakely, Foreword -- Jack Shakely * Foreword *
"There's plenty to satisfy, entertain and prod most golfers to want to read this one on Pebble. . . . An absolute winner!"-Bob Koczor, Golf Today -- Bob Koczor * Golf Today *
"Few courses have spawned as many published words as Pebble Beach. It's unlikely that any writer will ever tackle this subject with the skill displayed by Jack."-Martin Kaufmann, Golf Week -- Martin Kaufmann * Golf Week *
"Every golfer goes through some variation of the mid-life crisis. Not everyone gets to do it on the Monterrey Peninsula. Once the obvious envy is removed from the equation, what's left is an inviting escapade into discovering-through a diverse cast from Michael Murphy and Clint Eastwood to the caddie corps and the author himself-why Pebble and its high-rent environs are always so absorbing, especially in an Open season."-Golf.com * Golf.com *
"A combination of history, celebrity-chasing and a few fleeting glimpses behind the "out of bounds" tapes strung around the iconic golf course, this book will not only provide a few laughs but also offer some revealing looks at the folks who make events like the U.S. Open and the AT&T Pebble Beach National Pro-Am tournaments function smoothly."Robert Walch, Salinas Californian -- Robert Walch * Salinas Californian *

A golf writer and former newspaper sports editor, Zachary Michael Jack has authored or edited more than a dozen books, including the anthology Inside the Ropes: Sportswriters Get Their Game On, available in a Bison Books edition. He teaches literary sportswriting and seminars in sports studies as an associate professor of English at North Central College in Naperville, Illinois.

1. Then God Created the Heavens and Earth, and Carmel-by-the-Sea, and God Said, "Let There Be Pebble" 000

4. Shivas Irons, the Great White Whale, and Golf in the Kingdom of Pebble 000

5. Hitting the Books at Pebble's School of Hard Rocks 000

6. How to Lose Your Pebble Virginity in Eighteen So-Not-Easy Holes 000

7. The Ballad of Bobby Clampett and Casey Boyns 000

8. Where the Bodies Are Buried: Touching Up the Mona Lisa, The Myth of the Fifth, and Other Chilling Tales from Stillwater Cove 000

14. We Are the Major Champions, My Friends: Pebble and Spyglass Hill on AT&T Moving Day 000

16. The Boy Wonder, the Bundchen-Brady, the Bathetic Mex, the Bra-Bearer, and the Boomer: Celebrity Rounds at Carmel-by-the-Sea-and-Be-Seen 000

GOR009768240
Let There Be Pebble: A Middle-Handicapper's Year in America's Garden of Golf by Zachary Michael Jack
Zachary Michael Jack
Used - Very Good
Hardback
University of Nebraska Press
2011-06-01
352
0803233574
9780803233577
N/A
Book picture is for illustrative purposes only, actual binding, cover or edition may vary.
This is a used book - there is no escaping the fact it has been read by someone else and it will show signs of wear and previous use. Overall we expect it to be in very good condition, but if you are not entirely satisfied please get in touch with us.