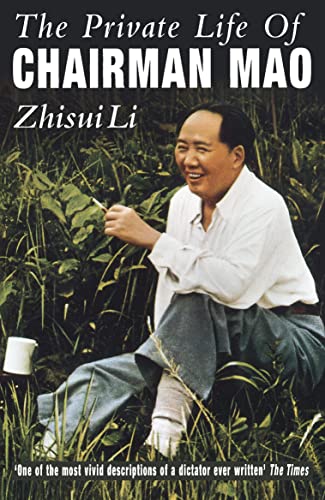 In Stock
$25.99
inc. GST
For 22 years, Dr Zhisui Li was Mao Tse-tung's personal physician, confidant and companion. In this biography Li provides insights into social and political events in China, and details of Mao's private life - from his sexual appetite to the political effects of his aims, fears and idiosyncrasies.
Very Good Good Well Read
6 in stock

For the first time, here is the extraordinary true story of one of the most powerful men, and ruthless dictators, who ever lived. Mao Zedong had control over more people for a longer period than any other leader in history. In this intimate biography we learn not only about the imperial grandeur of his life in a country racked by poverty and the vicious infighting at his court, but also about his extraordinary personal habits that equal those of deceased Korean supreme leader, Kim Jong Il, another infamous and idiosyncratic dictator, equally deified and worshipped by his followers: Mao's teeth turned black because he would only brush them with tea; he hardly ever bathed but then received Krushchev in his swimming pool where he obliged the Soviet President to join him. Li's revealing account also chronicles Mao's voracious sexual appetite that led to the seduction of thousands of peasant women because he believed in the mythical healing power of sex. Zhisui Li spent more time with Mao than perhaps any other person. He witnessed first-hand the catastrophic events that Mao's dotage and paranoia sparked in a country that revered him as a demi-god. The Private Life of Chairman Mao is a landmark biography, as fascinating as it is important to the understanding of modern China, and a must buy for fans of Wild Swans.

"Li is Mao's Boswell" * Irish Times *
"A unique political and historical autobiography of inestimable worth, an astounding chronicle of human weakness, political intrigue and corruption and the near destruction of a great nation by a great ego" -- Martin Booth
"One of the most vivid descriptions of a dictator ever written" * The Times *
"A classic . . . I see Dr. Li as the Tacitus of modern China" -- Hugh Trevor-Roper

Zhisui Li was Mao Zedong's personal physician for twenty-two years. He immigrated to the United States in 1988, where he wrote the hugely popular biography of Chairman Mao.

GOR001188647
Private Life Of Chairman Mao: The Memoirs of Mao's Personal Physician by Zhisui Li
Zhisui Li
Used - Very Good
Paperback
Cornerstone
1996-04-04
720
0099648814
9780099648819
N/A
Book picture is for illustrative purposes only, actual binding, cover or edition may vary.
This is a used book - there is no escaping the fact it has been read by someone else and it will show signs of wear and previous use. Overall we expect it to be in very good condition, but if you are not entirely satisfied please get in touch with us.