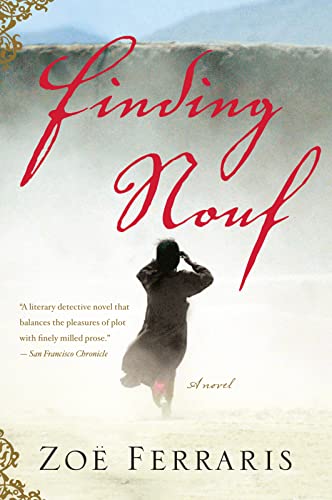 Zoe Ferraris's electrifying debut of taut psychological suspense offers an unprecedented window into Saudi Arabia and the lives of men and women there. When sixteen-year-old Nouf goes missing, along with a truck and her favorite camel, her prominent family calls on Nayir al-Sharqi, a desert guide, to lead a search party. Ten days later, just as Nayir is about to give up in frustration, her body is discovered by anonymous desert travelers. But when the coroner's office determines that Nouf died not of dehydration but from drowning, and her family seems suspiciously uninterested in getting at the truth, Nayir takes it upon himself to find out what really happened to her.

This mission will push gentle, hulking, pious Nayir, a Palestinian orphan raised by his bachelor uncle, to delve into the secret life of a rich, protected teenage girl--in one of the most rigidly gender-segregated of Middle Eastern societies. Initially horrified at the idea of a woman bold enough to bare her face and to work in public, Nayir soon realizes that if he wants to gain access to the hidden world of women, he will have to join forces with Katya Hijazi, a lab worker at the coroner's office. Their partnership challenges Nayir, bringing him face to face with his desire for female companionship and the limitations imposed by his beliefs. It also ultimately leads them both to surprising revelations. Fast-paced and utterly transporting, Finding Nouf offers an intimate glimpse inside a closed society and a riveting literary mystery.

"Ferraris writes with authority on how Saudi insiders and outsiders alike perceive the United States ... With equal authority, she stakes her own claim on the world map, opening Saudi Arabia up for mystery fans to reveal the true minds and hearts of its denizens."--Sarah Weinman "Los Angeles Times "
Finding Nouf is an astounding feat of storytelling, a gripping novel that also explores with unsparing, sympathetic insight how the men and women of Saudi Arabia's new generation struggle with their modernizing yet still traditional society. --Azadeh Moaveni, author of Lipstick Jihad

Finding Nouf is my favorite kind of mystery: an unlikely detective guiding us through an unfamiliar world. Ferraris uses the genre smartly, setting an unsolved murder in a society that is complex, veiled, and itself full of mystery and intrigue.
--David Ebershoff, author of The 19th Wife

Zoe Ferraris's novel lifts the veil on the repressed personal lives of Saudi Arabia's rich, giving us unparalleled insight into daily life in an oft-caricatured culture--and a great mystery. Her detective, Nayir al-Sharqi, is a sharp desert guide, and one might say that in her writing Ferraris follows a similar profession. --Matt Beynon Rees, author of The Collaborator of Bethlehem

The mystery that preoccupies Finding Nouf keeps you turning its pages, while its characters linger with you long after you've finished. Katya and Nayir's unconventional partnership argues for the virtues of reconciliation even as it throws off sparks. Finding Nouf is a compelling and deeply humane book.--Anita Amirrezvani, author of The Blood of Flowers

Ferraris offers up a fascinating peek into the lives and minds of devout Muslim men and women while serving up an engrossing mystery ... Highly recommended.
Library Journal

"Ferraris writes with authority on how Saudi insiders and outsiders alike perceive the United States ... With equal authority, she stakes her own claim on the world map, opening Saudi Arabia up for mystery fans to reveal the true minds and hearts of its denizens." Los Angeles Times

"The author's canny move using the tried-and-true murder mystery format allows her to sketch a trenchant portrait of Saudi society within an engaging yarn." Minneapolis Star-Tribune

What truly sets this book apart from a detective novel is its prose.
The San Francisco Chronicle

"What's remarkable about this debut is that its mystery takes place within a culture that is largely under wraps ... The thriller plot is well-placed. But it's the individual journeys of Nayir and Katya, who abide by society's strictures even as they are frustrated by them, that elevate Finding Nouf to a larger human drama."--Entertainment Weekly
"[Ferraris] weaves a richly detailed tapestry of the country's gender-segregated and pious Muslim culture."--Washington Post
"A finely tuned character study ... both particularly well-crafted and readily accessible for American readers. Just make sure you turn up the air-conditioning before sitting down to read." --Christian Science Monitor
"In Finding Nouf, first-time novelist [Zoe Ferraris] gives us an imaginative and closely observed murder mystery set in the Saudi port town of Jeddah, a literary detective novel that balances the pleasures of plot with finely milled prose ... As a good detective novel should, Finding Nouf visits all the nooks and crannies of society ... Characters a lesser writer would skim over with a few generic adjectives come alive in Ferraris's hands and pull you into their world. But what truly sets this book apart from a detective novel is its prose."--San Francisco Chronicle
"The author's canny move using the tried-and-true murder mystery format allows her to sketch a trenchant portrait of Saudi society within an engaging yarn."--Minneapolis Star Tribune
"Finding Nouf, Zoe Ferraris's engrossing debut novel, yanks the veil off Saudi Arabian culture while unraveling a compelling murder mystery."--The Oregonian
"Reads like a breeze ... Ferraris offers a fascinating glimpse inside domestic Saudi Arabia. Even better, she has written a fascinating thriller, not only an academic treatment. Finding Nouf turns out to be a great beach read."--Cleveland Plain Dealer

ZOE FERRARIS was born in Oklahoma. She moved to Saudi Arabia in the aftermath of the first gulf war to live with her then husband and his extended family of Saudi-Palestinian Bedouins, who had never welcomed an American into their lives before. She has an MFA from Columbia University and lives in San Francisco.

GOR002665614
Finding Nouf by Zoe Ferraris
Zoe Ferraris
Used - Very Good
Paperback
Unknown
0
0547237782
9780547237787
N/A
Book picture is for illustrative purposes only, actual binding, cover or edition may vary.
This is a used book - there is no escaping the fact it has been read by someone else and it will show signs of wear and previous use. Overall we expect it to be in very good condition, but if you are not entirely satisfied please get in touch with us.