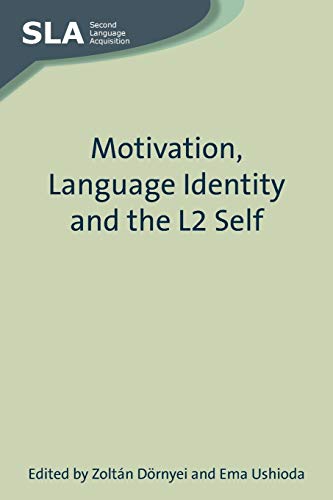 Motivation, Language Identity and the L2 Self by Zoltan Doernyei

With contributions by leading European, North American and Asian scholars, this volume offers a comprehensive anthology of conceptual and empirical papers describing the latest developments in L2 motivation research that involves the reframing of motivation in the context of contemporary notions of self and identity.

Motivation, Language Identity and the L2 Self by Zoltan Doernyei

Due to its theoretical and educational significance within the language learning process, the study of L2 motivation has been an important area of second language acquisition research for several decades. Over the last few years L2 motivation research has taken an exciting new turn by focusing increasingly on the language learner's situated identity and various self-perceptions. As a result, the concept of L2 motivation is currently in the process of being radically reconceptualised and re-theorised in the context of contemporary notions of self and identity. With contributions by leading European, North American and Asian scholars, this volume brings together the first comprehensive anthology of key conceptual and empirical papers that mark this important paradigmatic shift.

The book is sophisticated, and readers will have to be already familiar with the fundamental aspects of L2 motivation research. Nevertheless, it would be an invaluable aid to researchers seeking to keep up with the ever-advancing developments in the area. Susan C. Baker, Department of Psychology, University of Queensland, Australia in Journal of Multilingual and Multicultural Development

Zoltan Doernyei is Professor of Psycholinguistics at the School of English, University of Nottingham. He has published widely on various aspects of second language acquisition and language learning motivation including Motivation, Language Identity and the L2 Self (2009, edited with Ema Ushioda).

1. Motivation, language identities and the L2 self: A theoretical overview - Ema Ushioda and Zoltan Doernyei

4. The L2 Motivational Self System among Japanese, Chinese and Iranian learners of English: A comparative study - Tatsuya Taguchi, Michael Magid and Mostafa Papi

6. Self and identity in L2 motivation in Japan: The ideal L2 self and Japanese learners of English - Stephen Ryan

7. International posture and the ideal L2 self in the Japanese EFL context - Tomoko Yashima

8. Motivation and vision: The relation between the ideal L2 self, imagination and visual style - Abdullah S. Al-Shehri

10. Toward the development of a scale to assess possible selves as a source of language learning motivation - Peter D. MacIntyre, Sean P. MacKinnon, and Richard Clement

11. A person-in-context relational view of emergent motivation, self and identity - Ema Ushioda

13. Imagined identity and the L2 self in the French Foreign Legion - Zachary Lyons

14. The sociocultural interface between ideal self and ought-to self: A case study of two Korean students' ESL motivation - Tae-Young Kim

15. The internalisation of language learning into the self and social identity - Kimberly A. Noels

17. Identity and self in e-language teaching - Cynthia White and Alex Ding

NGR9781847691279
9781847691279
1847691277
Motivation, Language Identity and the L2 Self by Zoltan Doernyei
Zoltan Doernyei
Second Language Acquisition
New
Paperback
Channel View Publications Ltd
20090112
376
N/A
Book picture is for illustrative purposes only, actual binding, cover or edition may vary.
This is a new book - be the first to read this copy. With untouched pages and a perfect binding, your brand new copy is ready to be opened for the first time
Trustpilot