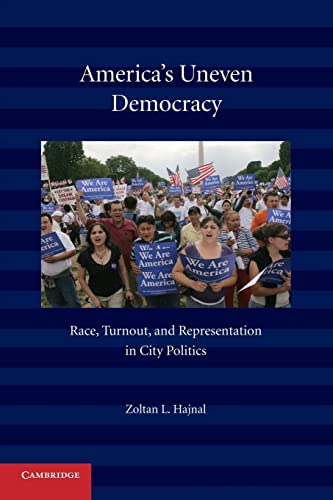 By offering a systematic account of how and where voter turnout matters in local politics, this book confirms long held suspicions about the under-representation of minorities and proposes a practical and cost-effective solution to the problem.

Although there is a widespread belief that uneven voter turnout leads to biased outcomes in American democracy, existing empirical tests have found few effects. By offering a systematic account of how and where turnout matters in local politics, this book challenges much of what we know about turnout in America today. It demonstrates that low and uneven turnout, a factor at play in most American cities, leads to sub-optimal outcomes for racial and ethnic minorities. Low turnout results in losses in mayoral elections, less equitable racial and ethnic representation on city councils, and skewed spending policies. The importance of turnout confirms long held suspicions about the under-representation of minorities and raises normative concerns about local democracy. Fortunately, this book offers a solution. Analysis of local participation indicates that a small change to local election timing - a reform that is cost effective and relatively easy to enact - could dramatically expand local voter turnout.
'This book mines some scholarly terrain that is, to our collective shame, most often ignored. And in this case, I'm convinced that Hajnal has struck gold. He challenges the conventional academic wisdom that varying levels of turnout in elections and, in particular, the 'problem' of low voter turnout isn't much of a problem at all. This conventional wisdom, he argues, misses a very important arena where turnout ought to matter: local elections. The differences between voters and non-voters not in preferences but in their racial and economic makeups should matter most at the local level, in part because the racial makeup of the electorate in most cities is more heterogeneous than the country as a whole, and also because turnout is typically lower in local elections. In fact, as Hajnal demonstrates clearly, local electorates are skewed in favor of the white, the well-educated, and the wealthy.' Paul Kellstedt, Texas A & M University
'Does turnout matter? In what's sure to be considered a model of social science research, Hajnal seamlessly weds the positive to the normative, illustrating that turn out does matter, and why it does so. With lucid prose and the use of simulations, Hajnal makes compelling the counterfactual case that more evenly distributed turn out across race would result in strikingly different electoral outcomes in key cities where minority candidates may have ultimately prevailed. With more sympathetic, and therefore more effective representation, he argues, chronically underserved members of racial minority groups will benefit. America's Uneven Democracy is a must read for students of race, representation, and urban politics. This book will become a classic.' Christopher Parker, University of Washington
'Hajnal offers a refreshing look at municipal elections and draws significant attention to how turnout effects electoral outcomes and subsequent government policies. The volume offers new empirical evidence for why generalizations about elections drawn from national studies may not be applicable to local elections.' Robert M. Stein, Rice University
'This is a ground-breaking analysis of how uneven turnout alters the balance of power in local politics. Zoltan Hajnal rigorously and comprehensively illustrates the myriad ways in which the relatively low turnout of racial minorities hinders their representation in the political sphere. In so doing, he provides a stern warning to those who feel that racial minorities are well represented in the age of Obama, as well as an important corrective to those that say that turnout does not matter in America.' Paul Frymer, Princeton University
Dr Zoltan Hajnal is currently Associate Professor of Political Science at the University of California, San Diego. He is the author of Changing White Attitudes Toward Black Leadership (Cambridge University Press, 2006) and his articles have appeared in the American Political Science Review, the Journal of Politics, Public Opinion Quarterly, and numerous other journals, edited volumes, and newspaper editorial pages. He was also the winner of the Best Paper in Urban Politics Award at the Annual Meeting of the American Political Science Association.
Introduction: the vote and democracy; 1. Where turnout should matter; 2. Turnout could matter at the local level; 3. Winners and losers in mayoral elections; 4. Turnout and representation on city councils; 5. Turnout and local government spending priorities; 6. Raising voter turnout; 7. The benefits of expanded participation; Appendix.
NLS9780521137508
9780521137508
0521137500
America's Uneven Democracy: Race, Turnout, and Representation in City Politics by Zoltan L. Hajnal (University of California, San Diego)
Zoltan L. Hajnal (University of California, San Diego)
New
Paperback
Cambridge University Press
2009-11-23
254
N/A
Book picture is for illustrative purposes only, actual binding, cover or edition may vary.
This is a new book - be the first to read this copy. With untouched pages and a perfect binding, your brand new copy is ready to be opened for the first time
Trustpilot