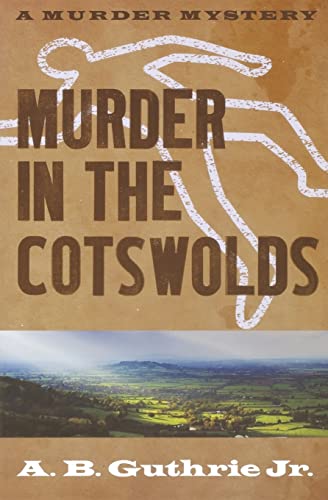 Murder in the Cotswolds
by A. B. Guthrie, Jr.

In Stock
£8.49
The last in the series of murder mysteries featuring Chick Charleston, this time set in an English village in the Cotswolds.
Very Good
Only 1 left

Murder in the Cotswolds Summary

Murder in the Cotswolds by A. B. Guthrie, Jr.

In the latest in his series of light-hearted stories, A. B. Guthrie transplants Midbury, Montana, sleuth Chick Charleston to a brand-new setting, a quiet English village in the Cotswolds. Chick and his wife, Geeta, are vacationing at the Ram's Head Inn, a quaint hotel in beautiful Upper Beechwood, where Geeta plans to trace her ancestors, but when an unpopular guest checks out early with a knife in his back, Chick gets involved in the search for the killer. Accustomed to the authority of a badge, Chick unfortunately can only assist with the investigation being run by Detective Chief Inspector Fred Perkins and his vindictive supervisor, Superintendent Hawley, whose style of police work doesn't always agree with Chick's. But Chick's Montana experience and good common sense serve him well as he unravels more than one English mystery. Full of the quirky characters and dry wit for which Guthrie is famous, Murder in the Cotswolds is a welcome addition to the series that the Cleveland Plain Dealer has called "just about perfect of its kind."

Murder in the Cotswolds Reviews

A. B. Guthrie Jr. (1901-91) was a historian and novelist whose 1949 book The Way West won the Pulitzer Prize for fiction. Murder in the Cotswolds is the fifth and final book in his Chick Charleston series, which includes Wild Pitch, The Genuine Article, No Second Wind, and Playing Catch-Up, all available in Bison Books editions.

GOR009959892
Murder in the Cotswolds by A. B. Guthrie, Jr.
A. B. Guthrie, Jr.
Used - Very Good
Paperback
University of Nebraska Press
2011-05-01
208
0803230311
9780803230316
N/A
Book picture is for illustrative purposes only, actual binding, cover or edition may vary.
This is a used book - there is no escaping the fact it has been read by someone else and it will show signs of wear and previous use. Overall we expect it to be in very good condition, but if you are not entirely satisfied please get in touch with us.