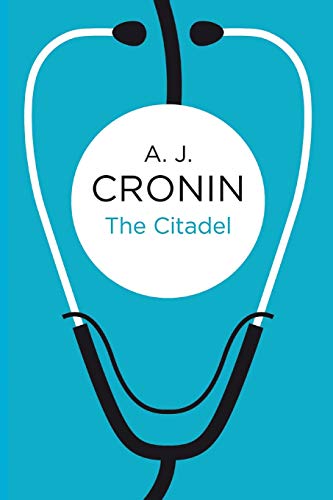 The Citadel
by A. J. Cronin

Used Price
£10.49
New RRP £16.99
Free Shipping in the UK
From the author of The Stars Look Down and The Citadel, and the creator of Dr Finlay's Casebook.
Reviews:
Trustpilot
Very Good

The Citadel by A. J. Cronin

An influential part in laying the foundation of the NHS, The Citadel is a moving story of tragedy, triumph and redemption.

When newly qualified doctor Andrew Manson takes up his first post in a Welsh mining community, the young Scot brings with him a bagful of idealism and enthusiasm. Both are soon strained to the limit as Andrew discovers the reality of performing operations on a kitchen table and washing in a scullery, of unspeakable sanitation, of common infantile cholera and enteritis. There are no X-rays, no ambulances - nothing to combat the disease and poverty.

It isn't long before Andrew's outspokenness and determination make him enemies - as well as winning him friends, and the love of an idealistic schoolteacher. Riches that he risks losing when the fashionable, greedy world of London medicine claims him, with its private clinics, wealthy, spoilt patients and huge rewards.

A classic saga by A J Cronin, one of the great masters of the genre, author of The Stars Look Down and Hatter's Castle.

A.J. Cronin was perhaps the most successful novelist of the 1930s ... probably as significant a figure as J.B. Priestley * The English Historical Review *
Immensely successful, utterly ruthless * The Spectator *
One of the most popular authors in the English speaking world * New York Times *
A grand story, well told, and better balanced than anything else he has done * Kirkus *

About A. J. Cronin

A J Cronin was born in Cardross, Scotland, in 1896 and studied at the University of Glasgow. In 1916 he served as a surgeon sub-lieutenant in the Royal Navy Volunteers Reserve, and at the war's end he completed his medical studies and practiced in South Wales. He was later appointed to the Ministry of Mines, studying the medical problems of the mining industry. He later moved to London and built up a successful practice in the West End. In 1931 he published his first book, Hatter's Castle, which was compared with the work of Dickens, Hardy and Balzac, winning him critical acclaim. Six years later he published The Citadel which brought attention to the incompetence of medical practice and helped incite the establishment of the NHS. Cronin died in 1931.